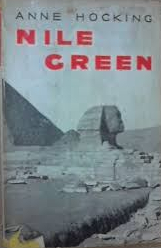 “She isn’t fit to live. She’s a Circe; she turns men into beasts.”

Scotland Yard Inspector William Austen, now stationed in Cairo with military intelligence, finds it hard to leave his old job behind. One day, he overhears a conversation between two dazzling young lovers. It’s not a happy one. “People don’t do that kind of thing to me,” Flavia tells Brian angrily, “and you’re not going to be the one to try.”

Hours later, Austen meets the couple again at a party—with Flavia’s husband Thomas in tow. When the guests adjourn to Mena House Hotel for a moonlight swim in the shadow of the Pyramids, Austen uses an air raid as an excuse to leave early. He’s not the only one to take advantage of this opportunity.

By midnight, Flavia Barry is dead at the bottom of the pool. She is buried before noon. By evening, Austen is investigating her murder.

Austen launches an unofficial inquiry at the insistence of Flavia’s wealthy father, who suspects her lover Brian of killing her. So does everyone else. Strangely enough, the only person who doesn’t blame Brian for Flavia’s death is Thomas, her cuckolded husband. As Austen digs deeper into Flavia’s life, with its tangled knot of affairs and betrayals, he comes to feel that she was “the type who ought to be murdered.” Then a shocking crime against an innocent victim changes the whole picture.

Although Inspector William Austen seems bland at first, a rather appealing personality emerges over the course of the book. We are told that Austen is “a lonely man,” as the demands of police work leave no time for friendship or romance. He is excited that his new position will allow for a social life. Initially shy and awkward, Austen comes out of his shell due to the murder probe. In the capacity of detective, he now feels comfortable enough to mingle freely in the English colony, making friends among the suspects, buying ices for giddy young ladies, and even doing a little matchmaking. He’s like a crime-solving Mary Poppins. 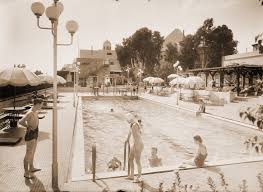 Still, whatever his personal feelings about the suspects, justice must prevail. As Austen points out, “The individual can’t allow himself, or another, to set himself above the laws which have been made for the protection of us all. That’s just what Hitler has done and look what’s come of it.”

The biggest draw of Nile Green is the setting, and here Hocking does not disappoint. Her descriptions of wartime Cairo are wonderfully resonant. Austen is revisiting a city he loved in the past, a warm and living place that he cannot help but contrast with the deprivations of London, “a London of grimness and destruction, of dogged endurance and bitter struggle.”

He was revelling in [the heat], enjoying the feeling of being baked right through to his bones; of being once more in a country where colours were colours, vivid, brilliant, arresting; where heat was heat, and where the streets were thronged with cheerful, busy, chattering people whose lives had been enhanced, not dimmed, by the war, and whose city had never known a bomb.

Even the war is different in Cairo.

Cairo’s air-raid siren is a weird and frightening thing. It sounds like the shrieking of countless hosts of disembodied spirits, or like hundreds of gigantic violins all played slightly out of tune, and it seems to wail and howl and moan round and round the city, echoing and re-echoing in quite seven discordant minor keys, with a blood-curdling effect.

Everything is different there.

“I’m not sure,” he said quietly, looking out beyond the river and the city to the dark stillness of the desert, where the Sphinx keeps her enigmatic watch beside the Pyramids, “whether night in the Mediterranean countries isn’t one of the most beautiful forms of darkness in the world. Even an English night, starry and clear in autumn, with the scent of dead leaves and bonfires rising to you, doesn’t beat it. This” –he flicked a finger into the blue— “has so much. These soft airs; the queer sounds; the essence of ancient worlds, of a civilisation immemorial—”

His reflections are tinged with a sort of pre-nostalgia, knowing that his time in Egypt will be brief.  Austen is actually somewhat frustrated that this murder investigation (which he has to fit in around his actual job) takes up so much of that limited time.

So why not turn the case over to the Egyptian police? Unfortunately, all of the characters, including Austen, indulge in casual racism throughout the first third of the book, referring to native Egyptians as “Gyppies,” “a beastly little rat crawling for baksheesh” (that one was about the medical examiner!) and so on. There are absolutely no Egyptians with speaking parts. Even at the end, everyone hesitates to hand a white killer over to the “barbaric” Egyptian justice system—missing the irony that the English are the ones who have been committing murder, adultery, and theft all along. Austen and his friends seem to love Egypt but hate Egyptians.

The other flaw of the book is an insufficiently proven solution. Though very careful in gathering evidence, Austen admits that “I’m doing exactly what I’d condemn in other people…I’ve got a theory and I’m trying to make the facts fit it and they just fail to. That’s the wrong way to go about things and I know it, and yet I don’t seem able to stop myself.” One of his goofier theories involves the killer entering the pool fully clothed, then wandering around soaking wet for the rest of the night. I mean, surely someone would notice? Austen thinks the clothing would dry quickly in the heat, but it wouldn’t dry instantly. While he ultimately feels he’s proven the suspect’s guilt fairly, the reader may not agree.

Anne Hocking is another case of a once-popular author whose work has fallen out of print and is now very scarce. Despite some flaws, on the basis of this book, I would say that Hocking deserves to be more widely available.

There is exactly one copy of Nile Green for sale right now, at the bargain price of $127.16.

The US edition, published as Death Loves a Shining Mark, does a little better. There are three copies available, starting at $53.99. Friends: do not pay $53.99 for this book. It’s not that good.