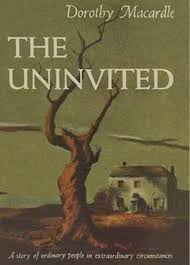 “I am sure that if spirits walk, it is in places that they have loved. That is why it seems foolish to be afraid of them […] Why should anyone be afraid of a happy ghost?”

Roderick and Pamela Fitzgerald have finally found the perfect house in the Devonshire countryside. Cliff End even comes complete with its very own ghost, the tragic Mary Meredith, who met a mysterious death there fifteen years earlier. It makes a picturesque story, but rumors of ghosts are surely exaggerated.

The brother and sister soon find that living in a haunted house isn’t as jolly as they imagined. They are kept awake by moans in the night, strange white mists, chills that seem to pass right through them. Even worse, some unseen force seems to zero in on their deepest insecurities, driving them to despair.

The only one who’s not afraid of Cliff End is Stella Meredith, Mary’s daughter. She’s convinced the spirit of her mother would never hurt her. But nothing in this house is as it seems, and there may be room for one more ghost at Cliff End.

The Uninvited is a sad, sweet ghost story which derives enormous fear from what should be the purest love, that of a mother and child. Stella is a lonely young woman, longing for the mother she never knew. She is willing to risk her sanity and even her life to be in her mother’s presence. As Stella is drawn further and further into the spirit world, she leaves real life behind, including a burgeoning relationship with Roderick. Stella could be healed by her mother’s loving spirit, or just as easily be destroyed by a vengeful ghost.

The late Mary Meredith is remembered as a saint, even taking her artist husband’s tempestuous model Carmel into her home. Mary plunged to her death after struggling with Carmel at the edge of a cliff, with Carmel herself perishing a short time later. The Fitzgerald siblings become convinced that the only way to save Stella is to solve the mystery of what happened that night on the cliff all those years ago.

As a house-hunter on a budget, I completely identify with Pamela and Roddy’s choice to salvage their real-estate bargain at all costs. Some of the book’s most enjoyable passages involve descriptions of the house and how it was fixed up:

In alcoves and corners, shelves and cupboards went up. We had never enjoyed ourselves more. On the tenth day after my arrival, suddenly, Cliff End was a home. The transition stage ended when the last stair-rod went down. In order to enjoy the full effect of the prospect we walked out of the house and in again at the front door. No entry could be more enticing. The carpet was blue, and spikes of delphinium glowed sapphire, mauve, and azure against the ivory paint of the landing and hall. Sunshine, streaming through the fanlight, twinkled on the face of the grandfather clock, on the copper bowls and hereditary warming pan.

The home, so sunny and cheerful by day, becomes hostile and sinister at night.

If I went out to the passage now, I would, perhaps, see it for myself—see what shape, whose form, what nature of thing this was. But I did not want to see it, and less still did I want it to touch me. I had made it more horrible, making it invisible, by turning on the lights.

Roddy and Pamela approach their ghost hunt in much the same optimistic spirit as their home renovation, only to find that some problems may be beyond their abilities.

Even before the ghost makes its debut, the characters in the novel are haunted by 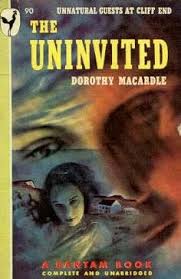 spectres from the past. Our narrator Roddy is trying to forget a past love affair. Stella’s autocratic grandfather is tormented by the memory of his dead daughter. Pamela worries about Stella because she, too, spent her youth chained to a demanding male relative after the early death of her mother. Living beneath her father’s thumb nearly drove her to a breakdown. Now that she is free to establish a life of her own, she’s afraid it may be too late. She doesn’t want that for Stella. The creepiest living figure in the book is Stella’s former nurse Miss Holloway, still obsessed by the beautiful Mary Meredith.

Though the female characters find themselves in various plights due to the power men hold over their lives, the men are ultimately beside the point. The most vital relationships are between women, and the showdown between two women battling for Stella’s soul is terrifying. Over the course of the story, it becomes clear how destructive it can be for both men and women when society idealizes home-making wives and mothers like Mary or dutiful daughters like Pamela while demonizing independent women such as Carmel.

This is not surprising, as Dorothy Macardle was known for her feminism, as well as for her supernatural fiction and political activism on behalf of the Irish Republic. (Éamon de Valera did not appreciate the feminist twist ending of The Uninvited, deeming the film version “typical Dorothy.”) The other work by Macardle that I’ve read, The Unforeseen, also deals with mother-daughter relationships, so this is clearly a theme that resonated with the author.

The Uninvited is a good old-fashioned ghost story, featuring plenty of hair-raising visitations from restless spirits. It’s also a poignant exploration of mothers, daughters, and the meaning of home. If the final chapter is not as frightening as it might be, it is in service of a larger thematic point—how easily, in the end, evil can crumble in the face of real love.

The Uninvited is a genuinely creepy tale of ghosts & the influence that the past can have on the present. The familiar tropes of the ghost story – the remote, abandoned house, the noises in the night, patches of unexplained cold, the cat who refuses to go into certain rooms – are there but very much grounded in a domestic story of renovating a house, making a home.

I enjoyed this as a novel but didn’t find it wholly satisfactory as a ghost story. In addition to a tone which is a little too cheerful to be chilling, the solution to the mystery is rather obvious and many readers will get there before Roddy and Pamela. This also detracts from the suspense.  Overall I found it to lack the truly uncanny quality of the best ghost stories.

The Uninvited is available in paperback and ebook editions from Tramp Press. It was originally published as Uneasy Freehold, but is practically nonexistent under that title.

The 1944 film adaptation is one of the great classic haunted-house films and will get you in the Halloween spirit any time of year.