When the plane from Reykjavik lands, however, Max is not aboard. Then Mary and Paul receive their seventeenth, and final, letter from their friend. Instead of a letter, the envelope marked “17” contains only blank pages and an old theater program. Mary and Paul are convinced that Max has sent them the clue to a serious crime. To prove it, they must navigate wartime secrecy and travel restrictions to plunge straight into a nest of saboteurs. With both Mounties and German spies on their trail, the Strongs are in for the adventure of their lives.

The 17th Letter is a smart thriller that incorporates many fascinating details of life on the homefront in the United States and Canada. Mary and Paul are equal partners in the quest to discover what really happened to their friend, and they always have each other’s backs, no matter how dire the situation becomes.

Paul’s magazine assigns him to investigate Max’s fate. He secures a cabin on the Shalimar, part of a convoy that is stopping in Iceland. The captain is known as “Lucky” Schott because he has survived countless run-ins with German U-boats. As Mary uneasily reflects, it actually doesn’t seem lucky at all to have had so many close calls. Just before the ship departs, Mary meets a mysterious stranger: “There is nothing for your husband in Reykjavik. He ought to go ashore in Halifax. Something is set up there for Saturday. I think myself they’re after the convoy.”

With the Shalimar officially incommunicado, she has no choice but to stow away so she can warn Paul. Strangely enough, their neighbors the Van Andas, Dutch refugees who have only just settled in New York, are also on board. So is a dead body. From this point on, it’s a dizzying round of crime and betrayal as Mary and Paul dodge the authorities and try to head off whatever catastrophe is going to take place in Halifax.

The Halifax setting lends a special quality to the wartime intrigue. It is portrayed as a kind of Brigadoon, “a small seaport city, which slept after every war, [and] had wakened up again.”

Quaint wasn’t exactly the word, thought Mary. Embracing the cemeteries and churches and monuments, overlooked by the lonely star-shaped fort on the hill above, and yet filled with strident clamor below, its narrow crooked bumpy streets and bumpier sidewalks thick with uniforms passing in double streams, Halifax clung to its past in no wistful way, but was sturdy, brawling, masculine—a man’s town made for sailor men. A woman would have softened it and cleaned it up, straightened out the higgledy-piggledy skyline, and stolen away its character.

Everywhere in Halifax was the feeling of restlessness and rush, overlaying the gnawing, subterranean strain of all-out war. Everywhere were people who were briefly there, passing on their way to keep an appointment with victory or, perhaps, with death.

Disney describes many aspects of life in Canada during this period, especially the role of the Royal Canadian Mounted Police in investigating espionage. Canada and the United States also prove to be two countries divided by a common language. The Strongs try to blend in, only to find themselves in constant danger of giving away their American origins through their phrasing and ignorance of Canadian ways.

Glancing furtively beneath the lenses of her spectacles, Mary saved herself from falling over an obstacle that rose abruptly from the sidewalk like a jolly-looking slot machine. It was plump and squat and painted bright red, but it was too low for a fire-alarm box. Besides it hadn’t any handle.

“What in the world?”

“A mailbox,” said the doctor quietly.

The partnership between Mary and Paul is the firm center of The 17th Letter. Unlike many other sleuthing couples, they don’t bicker or trade quips, but their relationship is far from dull. Mary loves Paul’s intelligence, and Paul loves Mary’s guts. If Paul tells Mary to jump off a moving ship, she does. If Mary vanishes without a word, Paul assumes she has a good reason and will return once her mission is accomplished. It is refreshing to see both spouses not only equally involved, but taking their equality for granted.

A holding tale, but it allows for too many closeshaves, too haphazard a dependence on luck and coincidence to carry much conviction. Good entertainment.

The 17th Letter is out of print. Used copies are not too difficult to come by, however.

Dorothy Cameron Disney was no relation to Walt, but obviously had a sense of humor about it. I am living for this photo of her at Disneyland, courtesy of her niece’s genealogy website, The Other Disneys, which also includes a biography of Dorothy. 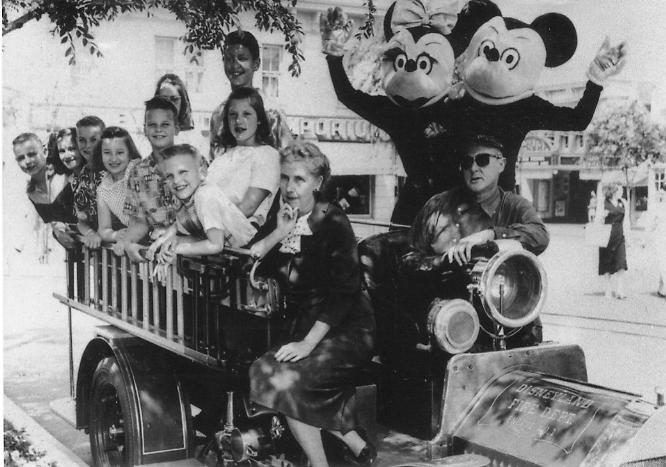