All the neighbors are dying to know what makes Mrs. Marrable’s poplars grow so well in the desert. That’s just one of Claire Marrable’s secrets. After the death of her husband, she decides she would rather be a wealthy widow than a poor one. The only thing holding her back is money, but that’s easily remedied. Rich old ladies are expected to hire companions, and hired companions are often alone in the world with their savings. Mrs. Marrable’s had five companions now, and there are five poplar trees lined up in her garden, all in a row.

But the sixth companion is different. Has Mrs. Marrable finally met her match? 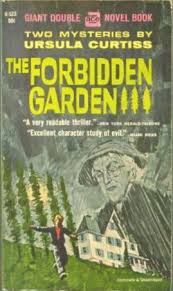 The Forbidden Garden is a wonderfully nasty morsel, poison all the way through. It’s a hilarious dark comedy that also examines the plight of elderly women in a society designed for the young. In a world where impoverished old ladies are expected to be invisible and dependent, Mrs. Marrable turns to murder so she can remain her own strident self, matter-of-factly knocking off the meek in order to finance her preferred lifestyle. (The irony is that she is essentially killing her own kind so she can avoid their fate.) She is a villain in the grand style: bold and cunning, with a “cold, tidy mind.”

Naturally, Mrs. Marrable prefers her privacy. When it is invaded, she becomes increasingly paranoid. Her nephew George and his wife Julia spoil her because they expect to inherit. Perhaps she’s done too good a job convincing them of her wealth. Against Mrs. Marrable’s wishes, George has installed tenants in the guest house, Harriet Crewe and her sickly, but curious, little nephew James. It’s certainly odd that just after Harriet moves in, a strange man starts prowling around after dark. Thank goodness for Mrs. Dimmock, the perfect companion—or is she? “Surveillance, blackmail, poison…not thoughts to sleep soundly with, and Mrs. Marrable did not.”

Homicide has become second nature to her now, and it is bleakly comic to watch Mrs. Marrable go through her paces, complicated by the belief that she is battling a fierce but unknown adversary. She even develops a literal evil eye, a facial tic she blames on stress.

Mrs. Marrable realized with shock that the methodical mind which had carried her safely through the last three years was beginning to veer in all directions. It was a little like being in a dark room and hearing a sound that seemed to come from all four corners at once.

Why, when Miss Tinsley [her previous companion] had been as eminently disappearable as all the others? Because George had come so soon afterwards, when the calf pocketbook still stood on the floor? Because the cottage was tenanted now? Or was it possible—the bizarre thought struck Mrs. Marrable—that this condition had been present from the very first venture, like a deadly cell lying buried in the tissues and only awaiting certain circumstances to multiply, run rampant, claim the helpless body for its own?

Across the garden, her nemesis Harriet Crewe vividly demonstrates what can happen to a single woman who lacks Mrs. Marrable’s fierce independence. Harriet is supposed to be in Santa Fe temporarily; when the severely asthmatic James needed a quick change of climate, his unmarried aunt was deputized for the job. As time passes, however, there is no sign of his parents. Harriet starts to wonder just what she’s let herself in for. As usual, Ursula Curtiss is dead-on with her portrayals of children.

Although his frequent illnesses had curtailed his physical activities, James was not a reader. At some future time, he might be a thinker; at present he was a talker. There were times when Harriet was driven to reflect that if he had not been visited by asthma he would have talked his lungs into some other kind of trouble. It was not the usual excited spate of childhood, but a mild, reflective stream-of-consciousness. He had seen a lizard under the woodpile that morning, a very dark blue one with a spot of white on its throat. Did Harriet like Theodore Roosevelt? (This was the kind of question that, because of its very lack of context, irritatingly demanded thought.) Mrs. Marrable had showed him the birdfeeder in her garden. 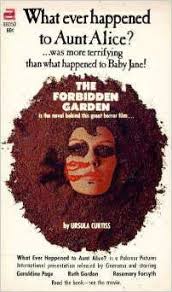 This is an interesting variation on the inverted mystery because, while Mrs. Marrable’s activities are known to the reader from the beginning, it is not known who, if anyone, is conspiring against her. Therefore when she decides to take action, it’s not clear whether it is “justified” even from her own warped perspective. The reader fears for both Mrs. Marrable and her potential victims simultaneously.

The Forbidden Garden is an acerbic black comedy that slowly builds in horror until it reaches a fabulously deranged climax. There is plenty of room in Mrs. Marrable’s garden. Can she be stopped, and do we even want her to be?

There’s no intention in The Forbidden Garden to create a masterpiece of literature for the ages. All that’s sought is to to entertain, and Curtiss succeeds superbly in this aim. I’ll certainly be looking out more of her work.

The Forbidden Garden (also published as Whatever Happened to Aunt Alice?) is out of print, with used copies easily available. This title was also published as an Ace Giant Double with Hours to Kill.

The film version, Whatever Happened to Aunt Alice?, is a classic of “psycho-biddy” horror. It’s available on DVD and BluRay from Kino Lorber in the US and Canada.

9 thoughts on “The Forbidden Garden (1962) by Ursula Curtiss”