Heiress Linnet Ridgeway has everything. She’s beautiful, rich, and completely independent. When she meets handsome Simon Doyle, her happiness is complete. The fact that Simon is engaged to her friend Jacqueline de Bellefort is surely just a technicality. Jackie doesn’t see it that way, however. She devotes herself to making the couple miserable, trailing them wherever they go.

As Linnet confides to Hercule Poirot, the newlyweds hope that a Nile cruise will help them escape Jacqueline. But Jacqueline isn’t the only one who might be dangerous to them. Someone like Linnet, who has so much of everything and takes it all for granted, provokes strong reactions. In the shadow of ancient temples, death has never been nearer, leading to a shocking crime. It won’t be easy for even the great Poirot to uncover a shipload of deadly secrets.

Death on the Nile is a nearly perfect detective story, combining a clever and well-clued crime with the most compelling personal drama in all of Agatha Christie’s work. The tragic love triangle between  Linnet, Jacqueline, and Simon is like the dark eye of a whirlpool, an undulating abyss that drags in everything and everyone around it. The human maelstroms on board spin out of control in unexpected ways as the ship drifts languidly downstream, baking in the sun. The situation also provides a distracting cover for other kinds of wrongdoing. Poirot, aided by Colonel Race, must untangle all of these threads along the way to the crime’s indelible solution.

This book also has a more personal meaning for me. As an Egypt-loving preteen, the title naturally jumped out at me from the shelves of the middle school library. And so, by sheer happenstance, I read not only my first Agatha Christie, but my first “adult” novel, charting the course for my entire future reading life. Of course, I had already encountered the classic mysteries: Encyclopedia Brown, the Baby-Sitters Club. But Claudia and the Phantom Phone Calls couldn’t hope to compete with the heady life-and-death struggles taking place on board the S.S. Karnak.

While the love triangle gets the most attention, all of the passengers have their secrets; some are comic, others poignant. Linnet’s financial advisor Andrew Pennington just happens to be on board. So does Ferguson, an anarchist (there’s always an anarchist). Wealthy, imperious Miss Van Schuyler runs her nurse Miss Bowers and shy companion Cornelia ragged. “It floated across Poirot’s mind that it seemed to be Cornelia’s fate either to be bullied or instructed. In any case, she was always the listener, never the talker.” Tim Allerton and his mother are expats stretching out a small income abroad—odd that they’re able to afford this expensive cruise. Sulky Rosalie is embarrassed by her mother, the terrifically dotty novelist Salome Otterbourne.

“Snow on the Desert’s Face—that is the title of my new book. Powerful—suggestive—Snow—on the desert—melted in the first flaming breath of passion.” Rosalie got up, muttering something, and moved away down into the dark garden.

“One must be strong,” went on Mrs. Otterbourne, wagging the turban emphatically. “Strong meat—that is what my books are—all important. Libraries banned—no matter! I speak the truth. Sex—ah! Monsieur Poirot, why is everyone so afraid of sex? The pivot of the universe!”

There are a lot of passengers on board. This is all right early on. Since the first crime does not take place until well into the book, their crises have all the time in the world to unfold. However, about halfway through the suspect interviews, I did start feeling that the herd could have used some thinning out. There are definitely moments of “Richetti? Is that a character in this book?”

Poirot takes a special interest in Jacqueline. As an expert in evil, Poirot tries to counsel an unhappy young woman bent on ruining her own life in a pointless quest for revenge. It’s futile, as Linnet and Simon can afford to keep running long past the point when Jacqueline will have to give up chasing them. Yet there is also something grand about her passion and recklessness, her willingness to risk it all on a long shot. That is, unless it’s directed at you.

“Mademoiselle, I beseech you, do not do what you are doing […] Do not open your heart to evil.”

Her lips fell apart; a look of bewilderment came into her eyes.

Poirot went on gravely: “Because—if you do—evil will come…Yes, very surely, evil will come…It will enter in and make its home within you, and after a little while, it will no longer be possible to drive it out.” 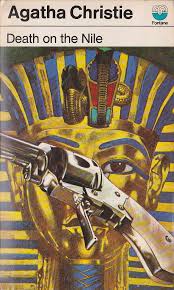 Jacqueline’s former best friend, Linnet, is equally fascinating. Though she means well and tries to be kind, it’s clear that her enormous wealth has left Linnet unprepared to deal with any negative experiences. It’s easy to be kind when you always get what you want, “the combined effect of money and charm. Everything goes down before you. What you can’t buy with cash, you buy with a smile.” Good things simply come to her, so subtly she’s hardly aware of it. People want to be around a rich, beautiful woman. They want to do things for her. But Jacqueline’s broken heart can’t be bought off, leaving Linnet at sea.

Yet her money and privilege also bring scrutiny, enemies she doesn’t even know. “Around a person like Linnet Doyle,” Poirot realizes, “there is so much—so many conflicting hates and jealousies and envies and meannesses. It is like a cloud of flies, buzzing, buzzing…”

Death on the Nile is a must-read, one of Agatha Christie’s greatest achievements in a career that is not exactly short on masterpieces. The crime is both elegantly constructed and eminently fair. Like Poirot, readers may spot certain aspects of the solution without quite being able to put it together, but all the pieces fit perfectly in the end. Though the summing-up of how the murders are carried out is very short and simple, that isn’t the end of the story. Solving the crime is the easy part—living with the consequences is the real difficulty.

Yet while some sharp cookies – like my buddy JJ himself – may argue that the sum total of Death on the Nile may be greater than its parts, largely due to a strange disconnect between the leading players and many of the passengers who orbit around them, ultimately the emotional satisfaction one derives at the end of Nile, combined with the cleverness of the murder plan, earns it the title of one of Christie’s masterpieces.

Beneath the Stains of Time

All in all, Death on the Nile comes fairly close to being a perfect detective story, with a plot and characters that balance each other out to a tee, and may very well be one of the Seven Wonders of the Golden Age.

This isn’t just a tale that takes place on a Nile riverboat in the 1930s.  It’s a story that feels as if it captures the essence of what it would be like to be there – at least from a romantic gentry-tinted perspective […] The mystery though…was dead obvious.  I saw what was happening before it happened, while it happened, and after it happened.  This wasn’t a mere hunch that I had spotted the killer – the solution sat in plain sight and every relevant clue further confirmed my theory.

Very simply – if you haven’t read this, read it. Now. One of the finest Poirot mysteries that should be sitting on bookshop shelves instead of a certain other book. Highly Recommended.

Death on the Nile is available as a paperback and ebook from HarperCollins.