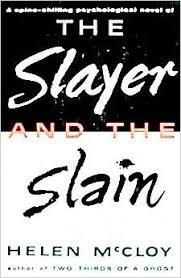 “They say you never see your own face as others see it because the face you see in a mirror is more self-conscious. Just as you never hear your own voice as others hear it because its tone is distorted by your skull’s resonance. It is hard to obey the philosophic injunction: Know thyself. Perhaps a man knows less about himself than anyone else he encounters.”

He must have slipped on the ice. That’s what everyone says when Harry Vaughan wakes up flat on his back in the middle of campus, twenty minutes of his life gone. He doesn’t remember falling, but it turns out there are a lot of things he doesn’t remember well in the aftermath of the accident.

An inheritance allows Harry to give up his thankless job as a college instructor and relocate to Clearwater, Virginia, his late mother’s hometown. He hopes for a quiet life, maybe to reconnect with a lost love. Soon, however, the community is plagued by unusual events, and his peaceful retreat is growing more dangerous with each passing day.

The Slayer and the Slain is a fine novel of psychological suspense, a brisk read that sustains tension all the way through. It was a pleasure to read. Yet after finishing, I can’t feel very strongly about it because I guessed almost every single plot twist (though in fairness, they did not all unfold exactly as I expected). Maybe I’m a genius, maybe Helen McCloy is too generous with foreshadowing, or maybe it’s just asking a lot for a book that would have been shocking in 1957 to remain shocking more than sixty years later. 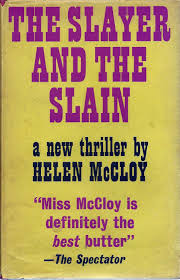 What McCloy does very well here, as always, is to conjure a haunting atmosphere out of a bucolic, and even banal, setting. For most of the novel, nothing much happens at all. Harry goes about his country pursuits, riding horses and settling into his new home. Initially, he is worried to learn that old flame Celia and her husband Simon will be his nearest neighbors, but the situation proves less awkward than he feared. At the moments when he seems most content, however, shadows fall suddenly across the sunshine—odd little things Harry can’t quite put out of his mind. By the time the real action begins, the tension is excruciating, as it really seems that anything at all could happen.

For most of the story, Harry is a rather colorless character. One often gets the sense that McCloy is using him as a mouthpiece for her own observations about American society. For instance, although he is naïve and awkward in his interactions with individual women, Harry seems to have a suspiciously sophisticated insight into women as a whole.

I have a theory that modern western woman has taken over eastern nail and eyelid paint as compensation for a life that is becoming less and less like that of an odalisque in the home as well as in factory and office. The servantless housewife who spends a great deal of her day performing such tasks of the untouchable caste as cleaning out toilet bowls and garbage cans revolts by making herself look as much as possible like an idle temple prostitute in the evening. But her air of luxurious decadence is all on the surface. Underneath she is the executive in the home, the business manager of the family. 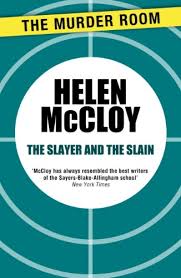 Harry’s interactions with his African-American servants, George and Martha, are thankfully free of racism. But he has theories about them, too, attributing Martha’s more guarded personality to her role as a mother. “Among mammals, parenthood is primarily a female function and the more parent you are the more you are concerned with the future since it governs your children’s lives. For this reason I believe that women, white or black, can never be quite as happy as men, for, to be happy, you must live like George, entirely in the present.” Again, apt though his thoughts might be, it seems unlikely that an unworldly, and generally oblivious, young bachelor like Harry would have so many highly developed ideas about motherhood.

The most distinctive characters are Harry’s painfully bougie cousin, Lex McLean, and his wife Molly, pure midcentury culture vultures. They aspire to the kind of very simple, unpretentious, quasi-rustic life that costs a fortune. In pursuit of that goal, the couple are formidable and shameless. Harry had hoped to keep his inheritance a secret to avoid hurt feelings, but Molly sees through him immediately.

“You’ve given up your job? What will you live on?”

This sort of question is what makes family relationships so much more stimulating than others.

Lex claims to be disgusted by Harry’s decision to live in Clearwater, so close to the suburban sprawl he disdains. “’There’s a development out that way too.’ Lex sounded as if he were saying: They’ve got smallpox there, too.” Still, he is clearly jealous that Harry is the one living his dream. Though Molly doesn’t play much of a role in the story, Lex is always rather suspiciously on the spot.

Even without its twisty plot, there’s a lot to enjoy in The Slayer and the Slain. It is a smart crime novel with a great deal to say about life and society in the United States in the years after World War II—a product of its time in the best possible way.

Someone coming to the book today, fifty-six years after it was published, may anticipate some of the developments, but even after McCloy herself makes a major revelation a good way before the end of the novel, interest only increases. This is the definition of “psychological suspense.”

A book that must be read to the very last page….

The reveal is done in a fascinating way, and there is still a ways to go. The final quarter of the story twists and turns like a knife, right down to the final sentence.

I can’t say that The Slayer and the Slain represents the same kind of traditional mystery that my colleagues in the Golden Age of Detection group covet as much as I do. But it is a fascinating, well-written psychological mystery well worth your time.

This is a difficult book to describe. It’s a standalone, not one of her Basil Willing books. It is very psychological, in a McCloy way and in a very 1950s way […] Let’s just say that it’s well up to McCloy standards.

The Slayer and the Slain is available from the Murder Room as an ebook in the US and  UK.