“What worries me is what’s going to happen next. The letters have dried up, as far as we know; but I feel it in my bones we’ve not heard the last of this nasty customer, whoever he is.”

John Waterson always planned a quiet retirement in the Dorset village of Netherplash Cantorum. The mental breakdown of his wife Jenny means that retirement has come a little sooner than expected, but there could certainly be no better place for Jenny to recover.

From the moment they arrive, however, the village is plagued by practical jokes and poison pen letters. These seemingly harmless hoaxes threaten to bring secret passions and hatreds into the open. John worries that his wife’s sanity is in danger. He should be fearing for their lives.

There’s nothing better than a good anonymous letter—in fiction, of course. The masterpiece of this subgenre is Agatha Christie’s The Moving Finger, but other authors like Ethel Lina White, Patricia Wentworth, and Henrietta Clandon have used this small, yet deeply unsettling, crime to excellent effect. The Deadly Joker does not rise to those heights. The anonymous letters are astonishingly nasty—so vile that they’d be impossible to shrug off. Several of the villagers who become victims (or possible perpetrators) of the hoaxes are portrayed with surprising depth. Unfortunately, the same cannot be said for John, Jenny, and his two young adult children. Their dullness creates a black hole right at the center of the story. 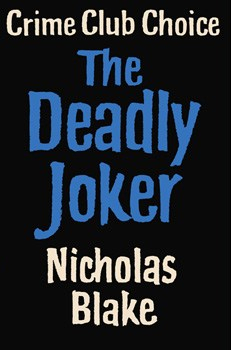 This is a difficult flaw to overcome. John is meant to be our everyman hero, with Jenny as the object of his protection and suspicion. Most of the plot consists of following him around as he does commonplace things and describes them at great length. Well, all right, he is supposed to be a slightly stodgy older man, after all. Jenny, however, is intended to be far more fascinating than she actually is. John is obsessed with his young wife, rhapsodizing about her beauty, brilliance, and charisma, none of which is apparent to the reader.

The scraps of personality Jenny does display are brought out, not by her husband, but by their new neighbor Bertie Card. Handsome cad Bertie and his half-brother Alwyn were once the squires of the manor. Having fallen on hard times, they sold the estate to Ronald Paston, a pushy businessman who is trying, and failing, to make a splash in the village. Alwyn is a former Bright Young Thing and inveterate practical joker. He’s an obvious suspect when the pranks begin, but doesn’t that, in itself, argue against his guilt? The Cards are not good people, yet they do have great charm and there is something pitiful about their immaturity.

Jenny claims she can’t stand Bertie, flippantly declaring, “I couldn’t take seriously the advances of any man called Egbert.” They seem to argue every time they’re together. One spat, after Jenny challenges Bertie on his use of a racial slur, feels especially real; it’s one of the few times Jenny seems like a human being. Yet John cannot help being aware that love and hatred are close neighbors.

Jenny loves me wholeheartedly, I said to myself, yes, but she is a young woman. I am an elderly man. So long as she needs me for a comforter, a father-figure as well as a lover, a support for her unstable temperament, all will be well. But how much longer will that dependence last, now she is almost restored to mental health? What right have I to expect that, with her loveliness, her vitality, her passionate interest in human beings, she should remain emotionally satisfied by a dry old stick like myself?

I heard an atrocious voice whisper in my mind, “So it would pay you to keep her unstable, wouldn’t it? Wouldn’t it?”

In fact, The Deadly Joker includes several husbands who fear they cannot satisfy their younger wives. Though Jenny forbids John from referring to their age difference, she often playfully calls attention to it, calling him her “old man.” Many of the jokes are designed to stoke fears of cuckoldry: a cuckoo that sings all night, anonymous letters warning that their wives are “wide open,” even a line of verse scrawled on the Watersons’ wall referencing a cuckoo. John would like to believe these are all harmless coincidences, maybe even a child’s prank. As he recognizes, however, “Village children do not customarily draw upon medieval poetry for their graffiti.” The very nature of the hoaxes suggests an adult mind, and a highly disturbed one.

Ronald and Vera Paston’s circumstances are uniquely difficult because Vera is Indian. Many of her neighbors exoticize her as Alwyn Card does. “Doesn’t go out much. The harem type,” he describes her. “Exotic is the word, I believe. Odd bird to find in a Dorset village. A passion flower among the primroses.” The passive, good-natured Vera is viewed by many as a sultry temptress. John sees her differently, but no less stereotypically. To him, Vera is infused with the “fatalism” of the East. “A goddess does not need to flirt, I found myself thinking: that is why she is so dangerous.”

In reality, Vera’s situation is deeply sad. Shunned by most of the villagers, treated as a trophy by her husband, she is willing to tolerate a great deal of casual racism in exchange for companionship. The Cards refer to her by a racist nickname, and even  John, who grows quite fond of Vera, argues heatedly that “You Indians are all over-sensitive about this colour-bar business.” Vera retorts, “Naturally we are. It’s we who suffer from it,” but John is utterly uninterested in learning about her feelings. He only wants to pat himself on the back for his own sensible opinions. Later, John is surprised when his son Sam suggests that maybe Vera “likes the idea of being treated by the English as a human being, not a sort of exotic curio,” but he’s still not terribly interested. Neither is the author, not really.

A mystery novel is, at heart, a kind of practical joke. Readers want to be fooled. They want to be surprised, to experience the relief of catharsis, and they want it all pulled off in plain sight. The Deadly Joker lacks the panache of the best practical jokes, the ones that leave you feeling delighted to have been tricked. Instead, there’s a real sense of nastiness lurking just below the surface. It never quite emerges, but it’s always there giving off an unpleasant feeling. At the same time, the milquetoast mind of John Waterson seems to make everything it touches a little more ordinary, allowing potentially fascinating situations to fizzle out. Ultimately, nothing about this story ends up being as interesting as John thinks it is. What should be an explosive ending is more like a deflated whoopee cushion.

The Deadly Joker is available in ebook and paperback from Bloomsbury.