“The biggest thing in this unholy mess of a case has yet to happen!”

The funeral is over. Wealthy art dealer Georg Khalkis has been laid to rest, and a motley group of relatives, employees, and hangers-on have adjourned to his Fifth Avenue mansion for the reading of the will. Five minutes before the funeral, the will was secure in Khalkis’ safe. Five minutes after the funeral, it has vanished. For neophyte detective Ellery Queen, the case that follows will be a baptism by fire that threatens to end his sleuthing career before it even begins. 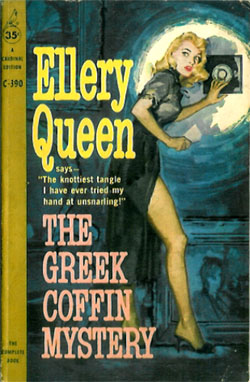 The stereotype of the golden age detective novel is that it represents a way of imposing order upon a morally complex post-World War I world. Violence strikes, an authority figure comes into to tidy it up, and peace is restored. Throughout the 1920s and 1930s, however, mystery authors were experimenting with a variety of radical innovations that, far from soothing readers, were intended to unsettle them further. The Greek Coffin Mystery builds upon the possibilities suggested by The Poisoned Chocolates Case by Anthony Berkeley (1929) and The Case with Nine Solutions by J. J. Connington (1928). Maybe a great detective is a fallible human being, capable of making mistakes. Maybe there are many possible solutions to a case. And perhaps all of those summing-up scenes that so logically and ruthlessly unveil the culprit might be dead wrong.

The Greek Coffin Mystery serves as a prequel to the three Ellery Queen novels that had already been published. This is a younger, brasher, even more pretentious Ellery. He’s fresh out of college and eager to establish himself as a brilliant detective whose powers eclipse even those of his own father, Inspector Richard Queen. Up to now, I’ve never shared the opinion that the young Ellery was an annoying character, but now I finally understand those claims. He is portrayed this way on purpose—Ellery is too full of youthful hubris and needs to be learn humility in order to be a real detective—but that doesn’t make it enjoyable to read. (Also, just how young does that make their child servant Djuna in this one? Djuna is always an uncomfortable character; making him even younger does not help.)

Just when Ellery seems completely unbearable, he undergoes some traumatic growing pains, including a humiliating dressing-down from his father, as he learns that crime-solving isn’t as easy as it looks. Unfortunately, it teaches him the wrong lesson—not to change his methods, but simply to stop talking about them.

If this affair has taught me one thing above all others, it’s taught me this—and if ever you catch me breaking this pledge put a bullet through my conk: Never again will I advance a solution of any case in which I may be interested until I have tenoned into the whole every single element of the crime, explained every particle of a loose end…When I think what a fool I’ve made of myself—what a swollen, unmitigated, egotistical jackass of a fool…

The suspects do not receive this level of characterization. For a bachelor, Georg Khalkis maintains a sizable household. His sister and her husband Gilbert Sloane (who also works at the Khalkis art gallery), along with her son Alan Cheney, live with Khalkis. So does his “idiot” cousin Demmy; he is the only cooperative witness in the bunch, so the Queens should really be kinder to him. Most prominently, Khalkis’ live-in secretary Joan Brett maintains a flirtatious relationship with Alan Cheney and an argumentative one with housekeeper Mrs. Simms and her cat, Tootsie. Joan is supposed to be smart and feisty, but is really just a pain.

Let me see, now. I’m twenty-two—past the marrying age, you see, Inspector—I have a strawberry on my right hip, I’ve a perfectly frightful passion for Ernest Hemingway, I think your politics are stuffy, and I just adore your undergrounds. Cela suffit?

Though her manners do improve a little over time, it honestly seems that all Joan ever does is snap at people or slap them in the face. She continually chides Ellery and the Inspector for interrupting her ramblings. Like, I’m sorry the police are asking you questions about this murder instead of letting you endlessly monologue about the housekeeper’s cat.

The start of the story is a little rough. Khalkis was a wealthy man, but it stretches the bounds of plausibility that the entire homicide squad would descend upon his home to strip-search other prominent citizens to find a missing will. Once the murder is discovered, however, the Queens really go to town with it. Unlike previous Queen adventures, which might trap the reader in an apartment for a hundred pages while a painstaking search is detailed, The Greek Coffin Mystery gathers its evidence more efficiently. The sinister graveyard scene is a highlight, made even more eerie by the honking horns and traffic noises floating over the walls of the churchyard.

It is at such moments that life becomes an ugly thing, pushed aside by the dreadful urgency of death, and time itself stands still.

For the space of a heart-beat they were puppets in a tableau—unmoving, moveless, stricken dumb, pure terror gleaming in their distended eyes.

The results of this excursion are horrifying. In terms of forensic detail, this has to be the most disgusting mystery of its era; I can’t think of any other GAD novel with such graphic descriptions of a decomposing corpse.

This level of detail is one of the joys of the book, however. This is a mystery in which absolutely nothing can be taken for granted. Every single fact of the case is fair game for a twist. Most detective stories are based on the existence of a few immutable facts which everyone agrees upon. The crime is solved by holding clues and alibis up against these established facts and determining which ones fit or do not fit. Here, every single clue must be examined in isolation, every characteristic of the suspects and victims must be painstakingly vetted.

As Ellery learns the hard way, a solution can be perfectly logical and beautifully explain every scrap of evidence, but all it takes is one inconvenient fact to destroy the entire theory. He soon begins to realize that detection is not a game, but a profound responsibility. Maybe there’s no such thing as a correct solution, only one that has not yet been disproven. Perhaps for this reason, the finale is more action-packed than usual, to make the culprit’s guilt absolutely clear.

The Greek Coffin Mystery offers an almost unprecedented sense of anarchy; after the first false solution, it really seems that anything could happen next. (The Poisoned Chocolates Case is much better at handling multiple solutions, but it’s also obvious right away what the structure is going to be. Here, it’s never certain which direction the plot is heading.) Though there were a number of things that irked me while reading, by the end, nearly all of them had been revealed as intentional clues. The puzzle is superlative, as one wonderfully complex solution after another is rolled out, with each false solution changing the entire landscape of the mystery. All that’s missing is the human element. While it’s nice to see development for Ellery, the other characters are barely distinguishable from one another. In a story about the high stakes of getting it wrong, it’s hard to worry too much about the fates of people who are nothing more than chess pieces for Ellery to move around his board.

In many ways the whole thing is nonsense – I don’t believe a real murderer would act as they do in this book – but if it is nonsense, it is glorious nonsense: a fabulously crafted example of the pure puzzle taken to extremes. Having learned in reading The Dutch Shoe Mystery to accept Queen on their own terms, I found this to be a brilliant read.

Yes, I acknowledge that it’s densely plotted and logical – but there’s damn all in the way of characterization, atmosphere, or humor. The multiple solutions are ingenious – but Anthony Berkeley’s Poisoned Chocolates Case offers eight solutions (twice as many as Greek Coffin) – and it’s clever in a way that Queen’s laborious, elephantine effort isn’t.

The Greek Coffin Mystery was definitely an improvement from the earlier Queen efforts in terms of the flow of the story and maintaining my interest.  It was overly long and somewhat unrelenting, but there was enough going on to keep me semi-engaged.  I still can’t say that I thought about the mystery while I wasn’t actively reading it, other than lamenting the notion that I could be spending the time with a book from another author.

All in all, an excellent mystery, but I think The French Powder Mystery is a little better for being a bit less convoluted.

The Greek Coffin Mystery is certainly a more interesting read than its immediate predecessor and I think the case is both the most complex and tricky of the first four. While I guessed at some developments correctly, I didn’t come close to the final answer as to what had happened and I felt things were tied together very tidily.

The Greek Coffin Mystery is available as an ebook from the Mysterious Press. Many used copies are also available.