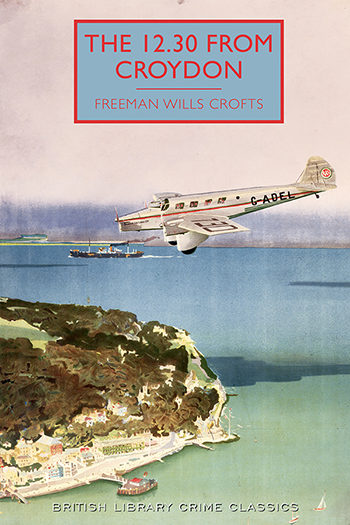 “How strange it was, Charles ruminated, that the useless and obstructive so often live on, while the valuable and progressive die early! Here was Andrew Crowther, a man whose existence was a misery to himself and a nuisance to all around him. Why should he be spared and others who perhaps were doing a great work in the world be cut off in their prime? It didn’t somehow seem right. For the sake of himself and everyone else it would be better if Andrew were to die.”

Even the irascible Andrew Crowther has to admit that flying is the only way to travel as he enjoys his first airplane ride. He’s in for some very unexpected turbulence, however. By the time the plane touches down in France, Andrew Crowther will be dead—not of the heart condition that’s troubled him for years, but of poison. How did a seemingly harmless elderly man meet his death 10,000 feet above the English Channel? His nephew Charles knows all about it. Now if only he can keep anyone else from finding out.

The 12.30 from Croydon is a superb inverted mystery rooted in the economic anxieties of the Great Depression. There’s no mystery about the fact that Charles Swinburn has decided to murder his uncle Andrew. The enjoyment comes from entering into the mind of a would-be killer, watching him plot the crime, step by step, and attempt to evade detection. This is an especially pleasing example of the inverted mystery because the crime itself is so well-planned and both the perpetrator and the victim are portrayed with relative subtlety.

The motive for the murder is simple: money. Charles wants to marry the lovely and expensive Una. However, the Crowther Electromotor Works has been slowly bleeding profits for some time. Charles has poured everything he has into the company, hoping that the economic situation would improve; a few thousand pounds would surely see him through the current slump. Charles doesn’t have it, but Uncle Andrew does. Whether he’s willing to share it will be a matter of life or death…for Andrew.

The murder plot that results is a marvel. A trained scientist, Charles works his way methodically through his plan, gathering supplies and laying groundwork without letting the reader in on the particulars of the scheme. This allows Crofts to build suspense in plain sight, revealing exactly what is happening while keeping the why and how under wraps. Even as Charles inches closer and closer to crime, he manages to convince himself that he isn’t really going to commit murder right up until the moment he actually does.

Somehow, alone there in the semi-darkness, the excellence of his own plans seemed less convincing than ever before. Stories he had read recurred to him in which the guilty had made perfect plans, but in all cases they had broken down. Those double tales of Austin Freeman’s! All the criminals had been so sure of their safety and the perfection of their schemes, and in every case these watertight schemes had been like sieves; just honeycombed with errors and oversights and clues.

Freeman Wills Crofts’ writing style, like his plotting, is clear and brisk, though admittedly his priorities are somewhat different from those of other authors, leading to some surprisingly coldblooded moments. In the opening chapter, he marvels at the miracle of flight through the eyes of a child—only to reveal that the little girl is unknowingly sharing a cabin with her grandfather’s corpse. The dance upon which Charles pins his romantic hopes is passed over with a handwave, as “one charity ball is very much like another,” while the narrative instead lingers over chamber of commerce lunches and descriptions of machinery.

He passed through the store, nodding to the storesman and running his eye along the shelves with their load of wire, castings, bolts, terminals, and spares of all kinds, and in another section the finished motors, stacked according to size and winding. Charles was very proud of his store, with the continuous card indicator system he had introduced by which at a glance the exact amount of everything stocked could be read off. Also it pleased him to see the neat way in which everything was stacked, and he complimented the storesman on his well-swept floor and tidy shelves.

Crofts never cares much for romance, even when it is meant to be a motive for murder, but his indifference doesn’t harm the story. It’s true that Charles’ desire for Una is less convincing than his love for the continuous card indicator system. Their relationship doesn’t take up much of the story, however, and is far from the worst romantic subplot that’s ever been foisted upon a mystery novel. Una is something of a femme fatale; one can easily imagine the noir version of this plot, but Crofts was never going to go there. He’s always more interested in the mind and the soul than in the heart.

Even as he is actively planning a homicide, Charles struggles to justify his crime from a logical and ethical standpoint. Andrew’s money does no good being hoarded by one old man. How much better for society if the money were being used to keep men in work—and Charles in luxury with Una. These characters are undoubtedly privileged, yet they are not immune from the effects of the Depression. It is oddly fascinating to watch Charles’ juggling act as he struggles to maintain the façade of a prosperous businessman even with the wolf at the door. By his own account, at least, he is a conscientious employer, supporting local businesses and keeping men on salary even when there is no longer enough work coming in to occupy them. It’s not just Charles, of course. Everyone is in trouble these days.

It’s frustrating to watch Charles try to convince the reclusive Andrew, who is something of a trendsetter in social distancing, that there really is a worldwide depression going on.

“Have you got this slump idea on the brain, too?” Andrew quavered. “I can tell you, my boy, that hard work on the right lines put into a business means prosperity, and slackness means failure. That has always been so and it always will. I suppose Bender is playing tennis and golf instead of minding his business.”

“No, I really think that you’re wrong there, uncle…Practically every firm is in the same boat. Look down your paper and you’ll see how receipts have shrunk in every direction.”

The old man chuckled childishly. “It’s only because nobody works now,” he persisted.

(With hindsight, it’s also difficult to watch Charles and his circle cash in everything they have to keep their doomed businesses afloat, knowing that the Depression is going to last so much longer than they expect. One character plans to make his fortune by investing in a farm in the United States. Enjoy that Dust Bowl!)

As much as I love inverted mysteries, there is one weakness universal to the genre. They always grow duller as soon as the police get involved. It’s inevitable—what can investigators learn that the reader does not already know? Crofts staves this off as long as possible by the simple expedient of keeping his series detective Inspector French almost entirely in the background. French appears late and infrequently. Of course, readers will suspect that French, that “pleasant, rather kindly and very ordinary man,” is up to something, and sure enough, there are some unexpected twists in store. Only the ending is belabored, with several long recitals of facts already known, though some of these scenes are at least delivered through an unusual point of view.

The 12.30 from Croydon is a must-read for fans of inverted mysteries, revolving around a meticulously plotted crime and a battle of wits between Inspector French and a clever killer. Even if the landing is a little rough, for most of its length, Crofts keeps the story flying high.

Charles is ultimately responsible for his own actions and we feel closer to his thinking as he makes each decision that will ultimately lead him to destruction. After witnessing everything from his perspective, the ending has all the more punch. So much so that not even the inevitable tedious and long-winded explanation from French on the last few pages can spoil it!

A rather interesting, if not entirely successful, experiment.

The 12.30 from Croydon (also published as Wilful and Premeditated) is available in paperbook, ebook, and audiobook formats from British Library Crime Classics and, in the US, Poisoned Pen Press.