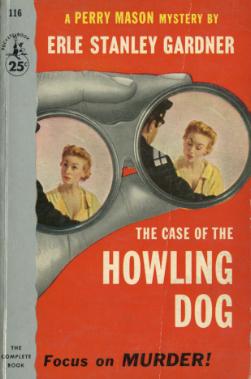 “What doesn’t fit in this case?” she asked.

Complaints about howling dogs are little outside Perry Mason’s area of expertise. His new client Arthur Cartright is insistent, however, that his neighbor Clinton Foley is inciting his dog to bark for the specific purpose of annoying Cartright. It is obvious to Mason that there is more going on here than a simple dispute between neighbors. As the feud reaches its boiling point, a case that began with a howling dog is about to get much more complicated. Luckily, murder is all in a day’s work for Mason. 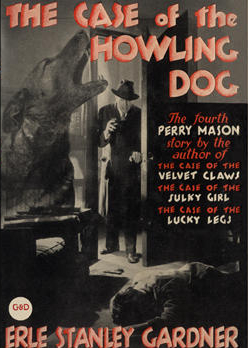 The Case of the Howling Dog is one of the best early Perry Mason novels. Its howling-dog setup is the purest possible example of the typical Mason plot, in which the brilliant attorney’s attention is captured by a strange but seemingly innocuous situation that quickly spirals out of control. As he battles for his client in the courtroom and on the front page, Mason will do anything within the law to win his case—and here, he comes closer to the edge than ever, committing a major ethical breach in service of his client.

When he arrives at Mason’s office, Arthur Cartright is clearly agitated. He claims that the incessant howling of Foley’s dog is driving him crazy. Foley counters with witnesses who swear the dog does not howl. Though Mason secretly wonders whether Cartright might be insane, this only strengthens his resolve to represent the interests of a vulnerable man, however minor his concern may seem to be. In addition, Clinton Foley’s over-the-top reaction to the complaint convinces Mason that there is more to their relationship than either man is willing to share.

Unlike the obviously weird Cartright, Foley seems to be normal enough, living a quiet life with his invalid wife Evelyn. Despite their large and prosperous home, the Foleys employ only two servants, housekeeper Thelma Benton and Chinese cook Ah Wong. (The treatment of Ah Wong is odd. Gardner seems to be setting him up for a significant role in the story, as well as laying groundwork for a critique of the treatment of immigrants, but then seems to forget all about it. Since this plot thread never goes anywhere, we are left only with the offensive initial setup.) Thelma Benton attracts Mason’s attention immediately: she is young and quite attractive, but seems to be intentionally making herself appear dowdier. She is also Foley’s star witness, insisting that his German shepherd Prince is a quiet animal. 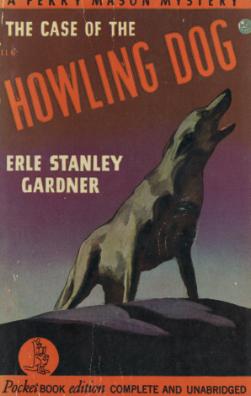 As Mason delves into the pasts of Cartright and Foley, he learns there is far more to the story than a dog that barks in the night. One mystery follows another, and every time Mason thinks he has a handle on the case, it throws him another curveball. For a long time he doesn’t even know who he’s supposed to be representing. Is it Arthur Cartright, Evelyn Foley, or someone else altogether? (This client, once the confusion is straightened out, proves to be that pearl beyond price—a client who actually obeys Mason’s instructions not to talk to police without a lawyer present. Over the decades, he has instructed every one of his 82 clients to keep quiet, but I can count on one hand the number who successfully manage it.)

One of the shocking things about Perry Mason’s early adventures is how much lying he does. Mason has absolutely no compunction about impersonation, bribery, manipulation, witness tampering, or just plain dishonesty, as long as it is technically legal. “This is on the up and up?” a skeptical accomplice asks. “It’s within the law,” Mason hedges. In The Case of the Howling Dog, he really goes all out. He stashes away witnesses, hires actors to impersonate suspects, leaks false information to the press, and so much more. In the process, he exposes his secretary Della Street and private investigator Paul Drake to potentially serious consequences. Of course, they are happy to sacrifice themselves for Mason, but he never even asks before embroiling them in these situations.

Mason’s other sidekick in this case is law clerk Frank Everly, who receives the benefit of his boss’s hard-earned legal knowledge. Mason’s philosophy is that a defense lawyer’s only moral obligation is to provide the best possible defense for their client. Anything else, as long as it doesn’t actually break the law, is fair game. It’s not enough to have facts on your side, either. An effective attorney must stage-manage a trial as if it were a play.

Pick some dominant emotion if you want, but touch on it only for a few moments. Then swing your argument on to something else. Then come back to it. The human mind is like a pendulum: you can start it swinging a little at a time and gradually come back with added force, until finally you can close in a bust of dramatic oratory, with the jury inflamed to white rage against the other side. But if you try to talk to a jury for as much as fifteen minutes, and harp continually upon one line, you will find that the jurors have quit listening to you before you finish.

His methods don’t always hold up to cross-examination, however. When Everly points out to Mason that one of his shenanigans has discredited testimony that they both know to be truthful, Mason shrugs it off. It’s always interesting to get these glimpses behind the curtain. Mason presents his methods as pure pragmatism, without ever quite acknowledging how much he contributes to, and thrives upon, the circus-like atmosphere of the courtroom.

“I don’t like routine,” Mason admits. “I want excitement. I want to work on matters of life and death where minutes count. I want the bizarre and the unusual.” He certainly gets all of that and more in The Case of the Howling Dog, which combines Perry Mason’s trademark courtroom pyrotechnics with some startlingly cynical behind the scenes manipulations. Even on the very last page the twists keep coming. With its intricate mystery and superior legal drama, The Case of the Howling Dog is one of Erle Stanley Gardner’s best.

Unfortunately I can only say that it is a really interesting book with a few elements that did not work for me and detracted from my overall impressions of the novel.

The Case of the Howling Dog is splendid entertainment. Highly recommended.

The Case of the Howling Dog is available as an ebook and audiobook. The 1934 film version stars Warren William as Mason, in an appropriately rascally performance.