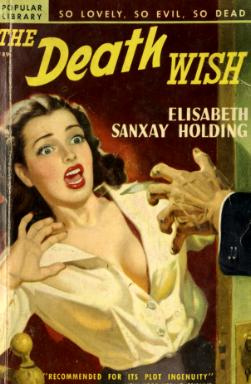 “He hates his wife. He’s not just irritated or bored with her. He hates her. That’s a damned ugly thing.”

Every morning, Shawe Delancey drives to the station, commutes to the office, then comes home again for dinner with his wife. On the surface, his life seems ordinary. The truth is quite different, however. His wife Josephine flies into miserable rages, demanding that he account for every moment of his day. Delancey is driven to the station by a chauffeured limousine paid for by his wife. All day, he sits alone in an office also financed by Josephine, waiting for business that never comes. And every evening, he returns, at the last possible moment, to a lonely house. It’s always just him and Josephine because she has quarreled with all the neighbors.

If only he could be more like his friend Bob Whitestone, with a loving wife like Rosalind. Whitestone seems to have everything a man could want—until the night he shocks Delancey with words that will change both of their lives forever: “I wish to God I could kill her.”

The Death Wish is a powerful work of psychological suspense that hinges on the danger of words, the way a wish, once spoken aloud, becomes real, regardless of whether it is ever acted upon. In a single, horrifying moment, Delancey finds himself bound to Whitestone forever by their shared desire to kill their wives. Whether either murder actually takes place is not the point. What Elisabeth Sanxay Holding so brilliantly explores is what happens to an ordinary person as they discover the evil that lies hidden within themselves.

It is perhaps unsurprising that Delancey would find Josephine difficult to deal with. Her jealousy and bad temper are exhausting; at the moment, the only friends she has left are the ones she’s bought, which include her husband. The shy, insignificant Delancey is an unlikely subject for Josephine’s passion, but it is precisely his milquetoast nature that makes it possible to withstand these explosions.

He felt no anger against her, only an immense boredom. These scenes had happened before; she made herself ill by them, by her wild unreasonable jealousy. He had never been unfaithful to her, or even contemplated such a thing, but he could not convince her of that. The only way to end these miserable episodes was by making love to her, flattering her, letting her “forgive” him—for what he had not done.

Whitestone’s predicament is less obvious. Rosalind is everything Josephine is not: young, cheerful, and unfailingly supportive of her husband’s artistic career. She never complains about their financial struggles. According to Whitestone, however, Rosalind subtly undermines his confidence at every turn, convincing all of their friends that his failure as a husband is wearing her down to the bone. She is determined to portray herself as his victim, plastering on “that brave, bright smile.”

Into the lives of these two men comes Elsie Sackett, the young houseguest of their neighbor. Is Elsie a nice girl, a ministering angel, a femme fatale, or simply a stubborn fool? She is all of these things and more. The male characters see Elsie as a puzzle to be solved. What they fail to realize is that she isn’t very interested in being figured out. She remains defiantly, perhaps ruinously, independent, determined to follow her own star no matter where it may lead her. “Whatever else you might say about her, she’s certainly no coquette,” one character observes. “But she’s a troublemaker…”

Over the course of the novel, Elsie will develop quite different relationships with Whitestone, Delancey, and fellow guest Hugh Acheson. Hugh is a wealthy sportsman with little interest in women; he is used to having eligible young ladies dangled in front of him and equally accustomed to politely brushing them off. He’s never met anyone quite like Elsie, though it’s less her personality that attracts him than the strange predicament she finds herself in. For the man who has everything, there is nothing more enticing than a real-life hunt, with murder as the stakes.

Hugh’s forays into amateur detection do not make him popular with the other characters, who label him a “prig” and “hard.” The Death Wish is explicit about the hazards of trying to solve a crime among people you know, aware all the while that the truth will hurt some of them greatly. Here, the police are nothing more than distant enemies. Holding keeps all interactions with law enforcement off screen—visits to the police station and jail are not important for what evidence they might disclose, but for what they reveal about the characters and their emotions. In fact, the reader forgets for long stretches of time that the police are even involved, allowing for some big surprises at the end. For this group, the police are merely a technicality. The one they really fear is Hugh, whose unrelenting pursuit of justice gives him the power of life or death over his friends.

I don’t enjoy hunting down the poor devil. I’m sorry for him…But it’s morbid—it’s dangerous—to keep all your pity for the people who break the laws, and have none for the victims. There’s no one who gets through life without any temptations. Most people are able to resist them, and they’re the ones to be considered, not the others.

It is Hugh, just as much as Delancey and Whitestone, who must confront an evil wish in his own heart. What right does he have to set himself up as an avenging angel, knowing that his quest must end in someone else’s death?

All of these characters are wonderfully complex. Delancey, who views himself as an indulgent and long-suffering husband, is also a spoiled gold-digger. Elsie is fiercely loyal, but to all the wrong people, unrepentant at the havoc she wreaks in the process. Even Josephine’s antics come from a pure love for her husband. There are no simple archetypes here. Everyone is a real person with both good and bad impulses, loves and hatreds that don’t always make sense. They mostly mean well, and that’s exactly what gets them into trouble.

Like Jean Potts’ 1962 novel The Evil Wish, The Death Wish is not too interested in the literal truth of whether its characters have committed murder. The guilt is in the wishing. The moment Whitestone and Delancey admit, even just in their own minds, that they long for the death of another human being, they are lost. This guilty knowledge will shape the rest of their lives—everything that happens from this point on springs from that original sin. The Death Wish shows just how much rotten fruit can grow from a single poisoned tree.

I think [Holding] is one of the unsung pioneers in American crime fiction and she deserves to be noticed for her accomplishments.

The Death Wish is available in a double volume with Net of Cobwebs from Stark House.

One thought on “The Death Wish (1934) by Elisabeth Sanxay Holding”