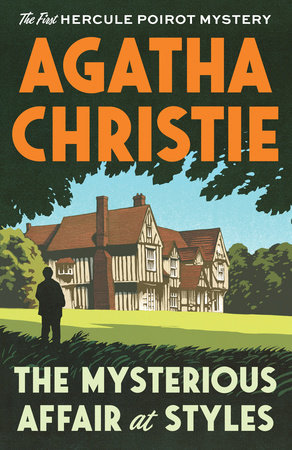 “Beware! Peril to the detective who says: ‘It is so small—it does not matter. It will not agree. I will forget it.’ That way lies confusion! Everything matters.”

Captain Hastings can’t think of a more peaceful spot to recover from his war injuries than Styles Hall, the country home of his old friend John Cavendish. He soon learns, however, that life at Styles is now very different than it was before the war. John’s marriage is in turmoil. He and his brother have grown apart from their stepmother Emily, who controls the entire estate. Worst of all, Emily has remarried to the horrible Alfred Inglethorpe. Even the normally stolid Hastings is uneasy about this volatile situation. He is soon proven right. 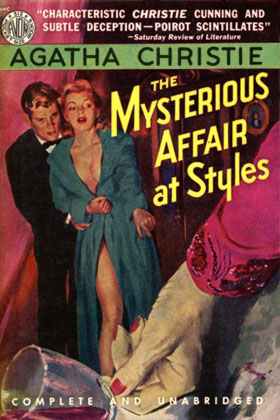 When Emily Inglethorpe is poisoned, the family is quick to point fingers at her husband Alfred, until a series of shocking revelations makes it clear that every one of them has a motive for the crime. Unfortunately for the murderer, there is also one recipient of Emily’s kindness who is determined to bring her killer to justice—a Belgian refugee by the name of Hercule Poirot.

One hundred years after publication, The Mysterious Affair at Styles has lost none of its charms. Agatha Christie’s debut novel is a wonderfully clever country-house mystery, demonstrating that her ingenuity and talent for misdirection were present from the very beginning of her career.

This also marks the debut of Hercule Poirot, whose persona is already fully established. He is provided with a poignant backstory, as an elderly former chief of police forced to flee Belgium as a war refugee; he is now billeted in communal housing with other refugees, living on charity. The villagers view these “foreigners” in their midst with suspicion, but Hastings is delighted to recognize his old friend.

Poirot was an extraordinary looking little man. He was hardly more than five feet, four inches, but carried himself with great dignity. His head was exactly the shape of an egg, and he always perched it a little on one side. His mustache was very stiff and military. The neatness of his attire was almost incredible. I believe a speck of dust would have caused him more pain than a bullet wound.

While Poirot does have a few moments here that seem out of character, his essential philosophy of detection remains unchanged: everything matters. If your theory cannot explain every piece of evidence, then the theory is wrong.

The friendship between Poirot and Hastings is delightful. Hastings is an endearingly clueless sidekick who manages to innocently misconstrue nearly everything. While Poirot recognizes his shortcomings, he also appreciates Hastings’ kind nature, as well as the unique insights his naivete can provide.

“There, mon ami, you will be of great assistance to me.”

I was pleased with the compliment. There had been times when I hardly thought that Poirot appreciated me at my true worth.

“Yes,” he continued, staring at me thoughtfully, “you will be invaluable.”

The murder of Emily Inglethorp is marvelously constructed, with many enticing clues (missing coffee cups, pieces of torn-up letters, mysterious scraps of fabric). It would take some period-specific knowledge to discern the significance of some clues, but the overall outline of the crime is perfectly solvable, relying more on human nature than on technical information.

The family circle at Styles revolves around Emily’s whims. As her companion Evelyn Howard explains, “She was very generous, but she always wanted a return. She never let people forget what she had done for them—and that way she missed love.” Though her stepsons John and Lawrence are outwardly affectionate, they are highly aware that she controls their father’s estate. It rankles that they are dependent on Emily for money that should rightly be theirs. Her marriage to Alfred, who fawns over her in his eccentric clothing and ridiculous black beard, terrifies them. What if she leaves the Cavendish money to this interloper?

The female characters are far more interesting than the men, who don’t show much personality. Evelyn’s blunt manner and clipped way of speaking sometimes get her into trouble; unlike John and Lawrence, however, she has the gumption to leave Styles rather than hang around grumbling. John’s wife, Mary, struggles to fit in. She lived an independent life before marriage and now chafes at her lack of freedom. Her unhappiness may be leading her into a dangerous friendship with toxicologist Dr. Bauerstein. (Hastings’ infatuation with Mary is a source of comic relief throughout.) Emily’s ward Cynthia is working as a hospital pharmacy assistant, the same post Christie held while writing The Mysterious Affair at Styles. There are several amusing scenes related to her work.

“We are really thinking of bestowing a prize on the first individual who does not say: ‘What a lot of bottles!’ And I know the next thing you’re going to say is: ‘How many people have you poisoned?'”

I pleaded guilty with a laugh.

“If you people only knew how fatally easy it is to poison someone by mistake, you wouldn’t joke about it.”

There are a few first-book wobbles here of the sort that would later be smoothed over as Christie became more confident in her style, including two lengthy courtroom sequences that slow down the plot. Styles also features some overt snobbery that undercuts the fun. There is a great deal of class-based judgment toward Alfred and xenophobic resentment of Dr. Bauerstein, attitudes that seem to be shared by the author. When the Cavendishes talk about these characters, they sound like spoiled brats, so it’s not very pleasant when Christie seems to agree with them.

The Mysterious Affair at Styles is so enjoyable overall that even its few missteps don’t detract from the pleasure of reading it. It fits seamlessly into Christie’s ouevre, a fitting start to the distinguished careers of Hercule Poirot and his creator, Agatha Christie.

The Mysterious Affair at Styles is simply wonderful.  It captures everything that I love best about Christie – the country houses, the characters, the misdirection, the changing society.  If Christie simply wrote this book over and over again for the next three decades, I’d be perfectly happy.

Christie is one of the few detective novelists who can–if it has been long enough since I last read the book–manage to pull the wool over my eyes more than once. She is a master of misdirection and even in her debut novel, she is quite good at making the reader look at this when they really ought to be looking at that.

All things considered, an excellent début.

Overall, it was a disappointing read. If you are new to Poirot series then I do not recommend you to start with this book.

It took me a while to warm up to the narrator’s impression of Poirot, I really enjoyed re-reading this book. Probably more than the first time or so that I read it.

A Crime Is Afoot

In any case its worth reading and it’s a fine introduction to Poirot book series.

The Mysterious Affair at Styles is in the public domain, and a free ebook is available at Project Gutenberg