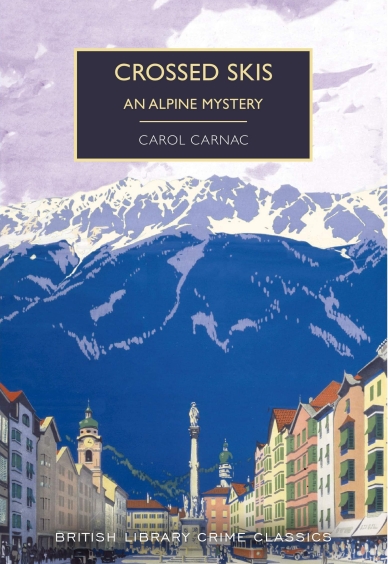 “We all set out feeling supremely confident. Everybody liked everybody else. We didn’t all know one another, but everybody was vouched for by somebody. So and so’s friend, he’s O.K. Now we feel we’ve got a snake in the grass and we don’t know who the snake is.”

As assorted Londoners stumble through a dark and cloudy New Year’s Day, some of them have reason to be grateful they are about to depart on a ski holiday to Austria. Sunny skies and bright, clean snow await them. Others are not so fortunate. Inspector Rivers and Sergeant Lancing are stuck back in London, investigating a fatal house fire. The cheerful skiing party seems a thousand miles away from a murder in London, but as the investigation progresses, Rivers wonders just how far murder can reach.

Crossed Skis is an enjoyable light mystery that juggles two storylines with ease, though the reader may wish Carol Carnac had seen fit to bring them together a little sooner. Both storylines have their charms. Rivers comes up with some clever ways of tracing the crime back to its origin, while the ski story gives modern readers a glimpse of what international travel was like during the postwar years. Although it seems apparent that there must be some link between the crime and the skiers, lending an atmosphere of tension to an otherwise unremarkable holiday, it takes an awfully long time for the characters to connect the dots.

After spending the New Year with her sister, Mabel Stein arrives home to find her house in flames and one of her lodgers dead inside. Inspector Rivers is suspicious of the fire, especially with Mrs. Stein’s ne’er-do-well son Syd skulking about. (Mrs. Stein’s efforts to protect her erring boy are a reliable source of comic relief.) The more he pokes around the crime scene, the more he begins to question the identity of the dead man. Early on, Rivers and Lancing come to believe that the culprit in this case is the same suspect who committed another daring crime. They learn a great deal about this person, yet they still have no idea who the suspect really is. 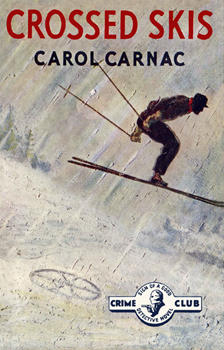 Meanwhile, a group of sixteen skiers, eight men and eight women, make their way across Europe. This is really too many. Only a few of these characters stand out at all, notably Kate, the oldest and most level-headed member of the company, and Bridget, who has the thankless task of organizing the whole trip. The practical details of their journey are fascinating from a distance of seventy years.

There are also plenty of clues amidst the chaos, even if the reader isn’t yet certain of what they should be watching for. It is pointed out more than once that most of the group are strangers to one another, as members of the original party dropped out and suggested others to take their place. Practical jokes, last-minute changes in sleeping arrangements, and unflattering passport photos are all normal aspects of travel. In this case, however, they take on a more sinister meaning. “Nobody fusses when it’s a party of English skiers,” one of the men notes. “They’re too used to us. Not one of us has even been asked to open a suitcase or rucksack and the passport examination is only perfunctory.” There could be no better cover for someone who wants to travel unnoticed.

World War II, only a few years in the past, also plays a role. At first, the English travelers are excited by the freedom of travel, leaving behind the rationing of home. Soon enough, however, they find themselves hemmed in by currency restrictions and border crossings: Austria was still, in the early 1950s, divided into zones administered by various Allied powers. Most of the group members are careful in their interactions, as “Austria is technically an ex-enemy country, and it’s up to us to be particularly scrupulous in our behavior to the Austrians.” Over the course of the trip, however, Kate has reason to recall that her traveling companions, who seem so young and carefree, are actually war veterans who have experienced things she cannot even imagine. Is it possible that one of them might have been warped by these traumas?

All of these concerns are forgotten when they arrive at the enchanting village of Lech am Arlberg.

It was lovely: even on the railway track and on the long low platform they were conscious of the snow peaks rising gloriously into the soft blue of the afternoon sky, of the powdery dryness of snow which had a totally different quality from the squalid soiled snow of the London streets. In the intense light, reflected back from white ground and roofs and slopes, everybody looked different: dark was darker, fair was fairer, color was brighter. Clearly defined, sharp cut, brilliantly lit, everything had a quality of vividness and vitality which was exciting, so that fatigue was forgotten and laughter bubbled up in a world which was as lovely as a fairy tale.

The attractiveness of the setting makes it easy to forget how deadly it can be, how easily snow can hide dangers. “There’s such a small margin between being safe and not being safe,” Kate worries, only for Bridget to point out, “That’s part of the attraction.” Still, Kate cannot help noticing the terror that lurks behind the mountain’s beauty:

It could submerge all of us in tons of purest snow, smooth as a cloud drift, and never show any humps where our bodies lie buried.

The skiers experience several close calls, one of them observing that there is something hypnotic about the snow that seems to prompt them to greater and greater recklessness. That is exactly what Rivers is hoping for as he closes in on the killer. After all, there is also a small margin between being bold and being careless. The atmosphere of a murder investigation can be as unforgiving as the harshest mountain range. All it takes is one slip.

Crossed Skis is an interesting twist on the whodunnit, as the reader must determine which member of the skiing party has something to hide. Rivers’ investigation provides a frisson of suspense to the ski plot, especially as the two stories begin to overlap more. While the mystery is not terribly complicated, the ski holiday setting is pleasant, Rivers is always a likable presence, and Carnac makes the most of the book’s unusual structure.

This is one that, unless the reader is clever enough to pick up on some subtle clues, will keep most guessing. A solid mystery, a very entertaining storyline. I highly recommend this one—and here’s hoping to see more Carnac in the future.

When it comes to identifying the murderer I think the reader will be able to narrow it down and then select the right person. Some of Carnac’s clues make this quite an easy job to do, but I enjoyed having other clues brought to my attention at the end of the book which I had not picked up on. So all in all a good read.

This is an enjoyable book, even for someone like me, who would rather do almost anything than ski!

It’s a model of police efficiency – but I don’t feel Lorac took full advantage of her setting.

While Crossed Skis did not cause me to significantly rethink my feelings about Lorac as a writer, I did find it to be an entertaining read. It boasts a solid, if relatively simple, mystery plot elevated by the unusual story structure and choice of setting.

Crossed Skis is available from British Library Crime Classics and from Poisoned Pen Press in the US.