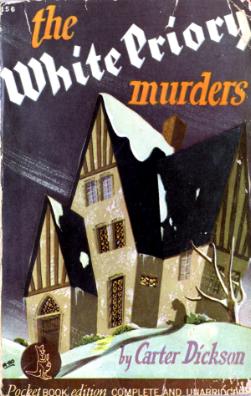 Centuries ago, the king’s mistress would wait for him in the Queen’s Mirror, a white marble folly surrounded by water on the estate of White Priory. Now, movie queen Marcia Tait awaits her lover there on Christmas Eve. And it’s there that her body is found on Christmas morning, her beautiful face smashed in. But with only one set of footprints in the snow, how did her killer escape? Though murder is the last thing Sir Henry Merrivale wants for Christmas, he is the only one who can solve this impossible crime.

The White Priory Murders has one of the most brilliant and satisfying solutions I’ve ever read. Merrivale effortlessly bats away theories of the murder, some of them quite plausible, before dropping a bombshell so perfect he could have stopped after one sentence and still left the reader convinced. Nearly every fact established early on holds up, yet within that framework, John Dickson Carr (writing as Carter Dickson) is constantly adding new information that changes the meaning and significance of each piece of evidence. White Priory as a whole is not as perfect as its solution, with stodgy pacing and fractious suspects slowing the story down early on. However, these issues fade into insignificance next to the pure delight of the denouement. 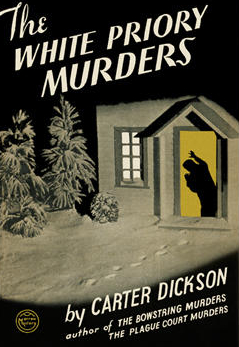 Before heading down to White Priory for the holidays, James Bennett consults his uncle Sir Henry Merrivale. (Sadly, after this brief appearance, Merrivale will disappear from the story for quite some time.) Bennett has fond memories of meeting Marcia Tait and her circle of admirers during their visit to the United States, but back in England, the dynamic has changed. Despite her Hollywood success, Marcia hasn’t forgotten the humiliation of an early theatrical flop. She is determined to conquer the West End no matter what. She has even convinced newspaper tycoon Lord Canifest to invest in the show, though his interest in Marcia is more personal than professional. Fledgling producer John Bohun is also in love with Marcia. He plans to star her in a play by his scholarly brother Maurice, much to the disgust of film executive Rainger, who is threatening to cancel Marcia’s contract. All of these people are invited to the Christmas festivities, along with John and Maurice’s niece Katherine and Lord Canifest’s emotionally unstable daughter Louise.

Bennett has already witnessed one attempt on Marcia’s life. He is worried that bringing this volatile group to the Bohuns’ ancestral home may lead to something even worse. “You can’t describe an atmosphere,” Bennett tells his uncle, “any more than you can describe a sultry day. And it’s atmosphere that Tait carries with her.” Marcia’s costar Jervis Willard is even more explicit: “She inspired devilishness wherever she went. If you didn’t love her, she was just as willing to have you–or anybody else–hate her.”

Bennett’s premonition is correct. Following a drunken and exhausted pre-dawn drive to White Priory, he arrives just as John Bohun discovers Marcia’s body in the Queen’s Mirror. The silent white house is completely surrounded by “thin ice and unbroken snow.” The only footsteps visible are the ones John has just made. Police determine that Marcia was killed after the snowfall. What they can’t explain is how this was done without leaving tracks behind. Scotland Yard Inspector Humphrey Masters is on hand to play Santa Claus for the local children, but the group of hung-over, argumentative suspects at White Priory all wind up on his naughty list.

In desperation, he summons Sir Henry Merrivale. This is what readers have been waiting for, especially as it comes rather late in the book. Thanks to “his weird, childlike, deadly brain,” Merrivale has “an unholy reputation of being able to see through a brick wall.” Before his trip overseas, Bennett’s father warns him what to expect from his legendary uncle.

“Don’t, under any circumstances, use any ceremony with him. He wouldn’t understand it. He has frequently got into trouble at political meetings by making speeches in which he absent-mindedly refers to their Home Secretary as Boko and their Premier as Horse face. You will probably find him asleep, although he will pretend he is very busy. His favorite delusion is that he is being persecuted, and that nobody appreciates him. His baronetcy is two or three hundred years old, and he is also a fighting Socialist. He is a qualified barrister and physician, and he speaks the world’s most slovenly grammar. His mind is scurrilous; he shocks lady typists, wears white socks, and appears in public without his necktie. Don’t be deceived by his looks; he likes to think he is as expressionless as a Buddha and as sour-faced as Scrooge. I might add,” said the elder Bennett, “that at criminal investigation he is a good deal of a genius.”

Carr often uses his characters to expound on philosophies of detection. Here, Merrivale is delighted to have a real impossible crime to sink his teeth into. He describes the three possible reasons for staging such a crime. The first two, a false suicide and a “ghost-fake” with supernatural elements, are obviously not applicable in the Tait murder. The third option is the most intriguing, that of an accidental impossible crime, “the murderer who creates an impossible situation despite himself, without wantin’ to.” Merrivale uses his observations of both victim and suspects to reconstruct the psychology behind the crime. If the impossible circumstances are not the premeditated plot of a criminal mastermind, then there must be some other reason why the murder turned out this way.

This is a slight problem because the suspects are reluctant to expose themselves to either Merrivale or the reader. Despite Bennett’s lengthy explanations of all the relationships, once the murder actually takes place, it’s difficult to keep everyone straight. In part, this is because a surprising number of suspects manage to avoid engaging with Masters or Merrivale in the first place due to illness, inebriation, or just plain orneriness. One major suspect never even appears at White Priory, another belatedly turns up after we’d forgotten their existence, yet another takes to their room and refuses to emerge until the end. The ones who do deign to be questioned don’t actually want to answer questions themselves; they only wish to share their own theories of the crime. Even Bennett hides information from his uncle because he’s sweet on one of the suspects. Merrivale is surprisingly tolerant of all this bad behavior, but it doesn’t make things easy for the reader.

The White Priory Murders is not a perfect novel, but it does have a perfect ending. This isn’t a cozy country-house mystery. It’s a bleak and cold one, with characters who are too wrapped up in their own concerns to worry about the murder. For a long time, it sort of plods along, feeling like no progress is being made with the case at all. It’s not until Merrivale makes his full entrance halfway in that the story picks up, leading to a spectacularly eerie finish that fits exactly with the personalities of the victim and the killer. There’s nothing better than being fooled by a master. In The White Priory Murders John Dickson Carr pulls off some truly astonishing sleight of hand, all of it in plain sight.

I’ll admit to feeling a bit disappointed with this one. But even if The Bowstring Murders was a snappier read, White Priory feels richer, both in its set-up and its mystery. You can feel all of Dickson’s cylinders clicking with this one.

Overall, I think the material in this book had a lot of potential but was not fully developed or utilised, in particular the characters and their relationship dynamics at the White Priory.

I don’t know whether everyone will experience this sudden click, but I have to think so.  Merrivale, of course, goes on to explain exactly what happened in depth, but I suspect that most readers will comprehend the core solution in reading that one perfect sentence.  That moment alone seals this story as one of Carr’s greatest accomplishments.

Now this is how you plot a mystery – there are a multitude of clues littering the story, some of which, when you examine them in hindsight are really obvious – but I’d be impressed with anyone who spots the murderer. The killer is remarkably, but fairly, well hidden but you’ll be kicking yourself that you didn’t spot who it was. None of the clues are particularly obscure (except for the one that needs a page reference – points off for that!) which is the charm. You feel after reading this one that you’ve been hoodwinked by a master.

The Reader Is Warned

It felt to me that each scene made sense being there, characters or dialogue didn’t seem superfluous, and even with the extended page count, each piece fitted together in a gorgeous plot with simple but shocking turns over the chapters that it kept me going at high pace.

The White Priory Murders is out of print, with used copies available. It was reprinted in the early 1990s by International Polygonics.

2 thoughts on “The White Priory Murders (1934) by Carter Dickson”