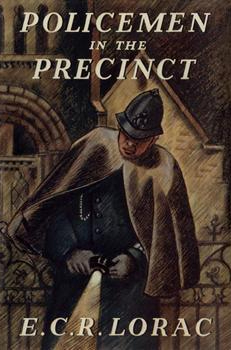 “She was a menace! So many people must be thankful to know she’s dead. It’s a dreadful thing to say, but it’s true.”

Lilian Mayden has always been an invalid, so her death from a heart ailment is not unexpected. The only surprising part is that Lilian had a heart in the first place. Even in the cathedral town of Paulborough, whose residents consider gossip a holy calling, Lilian’s brand of gossip is exceptional for its malice.

The only person who seems dissatisfied about Lilian’s death is her doctor, since her condition was stable the last time he saw her. The postmortem results are astonishing: Lilian Mayden died of electrocution. How could a woman be electrocuted in her own sitting-room?

There is nothing flashy or spectacular about Policemen in the Precinct. It’s simply a superb detective story with a well-realized setting, a hateable victim, and plenty of sympathetic yet fallible suspects. The murder method is definitely unusual, and actually quite frightening—every light switch or appliance is fraught with danger. Chief Inspector Macdonald and his cheerful sidekick Inspector Reeves must immerse themselves in the community as they painstakingly prove their case, with all of the clues cleverly planted by Lorac.

Mrs. Mayden is the sort of person who writes poison pen letters and proudly signs her name to them. The mere sight of an envelope from her in the postbox is enough to strike terror into the hearts of her neighbors. The people of Paulborough have long wondered at the source of her information, since ill health has confined her to her home for years. No one blames her handsome, immature husband Guy for seeking solace in alcohol (and maybe other things as well) behind his wife’s back. Lilian’s only defender is her old friend Allison Bentham, who remembers Lilian’s emotionally abusive childhood with her religious-fanatic father. “When a woman’s mind is warped there’s nearly always a reason for it,” Allison asserts. “Do you think anyone is happy when they turn everyone against them? She made enemies of all her friends, and she knew it. She was the most unhappy creature I have ever known.”

Massage therapist Gillian Arkholme can’t feel any sympathy for the dead woman. She hasn’t forgotten that Lilian tried to ruin her career by spreading news of a wartime liaison with Captain Yealand, a married man. While Gillian did spend the night with a serviceman, it wasn’t Captain Yealand—it was her own fiancé, who was killed soon after. In the days before her death, Lilian was starting to circulate the old, false story again, perhaps because Yealand is back in the area. Gillian is distressed by the rumor’s resurgence; she is newly engaged, and a headmaster’s wife must be above reproach. Macdonald is very interested to learn that Gillian uses electronic massage equipment on her patients, including Lilian.

The Scotland Yard officers discover that these crimes—Lilian’s blackmail and Lilian’s murder—have their roots in the culture of Paulborough itself. The presence of the cathedral encourages outward shows of virtue that inevitably breed secrets and hypocrisy. It’s not that the people of Paulborough are so bad, says Reeves sardonically. “They only seem worse than other people because they profess to be so much better.” Allison warns Gillian to be careful in her interactions with townspeople.

You weren’t born and brought up in Paulborough, my dear. I was. I know that under the very shadow of the great Abbey there is more envy, hatred, malice, and all uncharitableness than in any godless ramshackle township in the Middle West. Plant a seed of slander in this soil and it will grow. You should know that. You said just now, “She tried to ruin me.” In any other place than this she wouldn’t have had much chance of succeeding, would she?

A murder investigation is Paulborough’s worst nightmare, as outsiders come in to expose their hidden lives. Even Macdonald sometimes finds it difficult to reconcile the beauty of the cathedral, its stained-glass windows climbing up to heaven, and the less-then-divine behavior of its parishioners. Their idea of decency has nothing to do with morality and everything to do with appearances. Macdonald, however, feels that “It’s not my province to be decent. It’s my job to get at the truth.” This isn’t The Nine Tailors—Macdonald turns down the chance for a guided tour of the cathedral, viewing it as an unnecessary distraction. As it turns out, however, the cathedral may have a closer relationship to the murder than police initially suspect.

Macdonald develops a rapport with several suspects, especially cynical organist Silverdale and kindly widow Allison Bentham, who was once in love with Guy Mayden and might still be. While never forgetting his suspicions, Macdonald nonetheless reveals a bit about his personal life during their interactions. A “London Scot” and First World War veteran, Macdonald’s attempt to resume his interrupted education after the war was dashed by the death of his father. No longer able to afford further studies, he left university to join the Metropolitan police. For twenty years, he shared rooms with a manservant, his batman from the war, but this man was killed during the Blitz in 1941. Since then, he has lived alone, not without occasional moments of melancholy. London is very different than it used to be but, then again, so many things are.

Macdonald’s capacity for taking interest in others is apparent as he and Reeves circulate around the area, picking up leads in the most unlikely places. Their most important clues come from simply interacting with local residents and paying attention to what they have to say. One major break results from Reeves taking time out of his day to help a woman stack her firewood, only for her to casually reveal new information that changes the whole course of the investigation. The culprit is not too difficult to figure out—if there is one flaw to Policemen in the Precinct, is the small list of suspects for a murder that should have had people lining up around the block to commit it—but I will admit that the biggest clue is right out in the open, yet I missed its significance entirely.

Policemen in the Precinct has a comforting solidity. It is just what you would want a village mystery to be, with plenty of secrets and surprises unfolding within a reassuringly familiar framework. Macdonald is described as a “humane” man, and this is certainly a humane book. Murder is committed, murderers are arrested, and life goes on Paulborough, just as it has for a thousand years.

In fact, I found her portrayal of the small world of the Abbey precinct even more interesting than the whodunit puzzle. In saying this, I must add that the “mystery” element of the story is certainly not weak or flimsy.

I managed to guess the identity of the murderer and I suspect that most die-hard crime fans will do the same. Still this is an entertaining read that recreates post WWII Britain and its shifting socioeconomic and moral landscape.

Policemen in the Precinct (also published as And Then Put Out the Light and No Place for Murder) is out of print, with a few, rather expensive, used copies available.