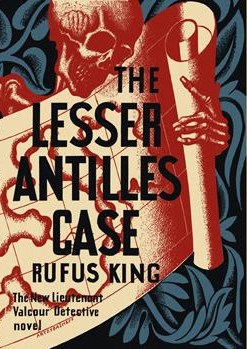 “Murder is not like lightning. It’s an established fact that until its source is checked it has an aptitude for striking again, Helen, and again.”

What begins as a leisurely Caribbean cruise ends in terror as the S.S. Helsinor is shipwrecked on a coral reef. The worst is yet to come, however. After several days on a deserted island, Lawrence Thacker, the owner of the yacht, insists they try sailing the lifeboat to safety. Ten passengers board the lifeboat. Only eight will live to tell the tale, and the events they recount are shocking. Lieutenant Valcour must navigate rough waters in this story of murder on the high seas. 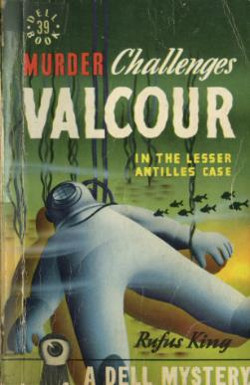 The Lesser Antilles Case is every bit as clever and sophisticated as one might expected from Rufus King, with Valcour facing a particularly difficult case. There are no bodies, no crime scene, and no real evidence. It’s not even clear whether the New York City police have jurisdiction. And the further their ordeal recedes into the past, the more reluctant the witnesses become. Now that they are back in their comfortable lives, “crime seemed so incompatible with a well-appointed apartment in New York.” The case comes down to an enthralling battle of wills between two formidable women, waged beneath the Caribbean sun.

One of them is Lillian Ash, a numerologist with a penchant for drama. Miss Ash insists that Lawrence Thacker and Third Mate Leighton Klein were poisoned and thrown overboard from the lifeboat while the rest of the passengers were drugged. In doing so, she makes a powerful enemy. Thacker’s aunt Helen Whitestone has always been the gentlest of maiden ladies. When her family’s reputation is threatened, however, she is inspired to stand up for herself, declaring, “I’ve no intention of joining the prevalent fashionable mode of wintering in a jail.” After all, what does anyone know of this Miss Ash, except that she stands to inherit a hefty sum from Lawrence Thacker’s estate? Then again, so does Miss Whitestone, her niece Erika Land, and various other relatives who were all on board the lifeboat. Miss Whitestone initially rouses a protective instinct in Valcour.

When Valcour was shown into the living room he found Miss Whitestone asleep. He stood for a moment looking down at her tired face which was set in old, grim lines. All the trappings and attributes of crime filled him with a faint disgust at moments such as this one. Her years alone had given this woman the right to peace, and yet here she was (because somebody for some private reason had thrown a couple of men overboard into the Caribbean Sea) sunk in a haggard sleep, with all her features hardened in the ugly mask of nervous worry. And here he was, the physical representation of an avenging law, all set, when she woke up, to be evasively tricky and smart and to worry her still further. He wished for the smugly moronic level of mind which could say, without the slightest effect upon the stomach at all, life was like that.

Once he’s heard Lillian Ash’s story, however, he’s no longer so sure. One thing is certain—neither of these ladies will go down without a fight.

In investigating the allegations, Valcour faces a unique challenge: the vast majority of his witnesses are dead. Of the thirty-two passengers and crew members who originally boarded the Helsinor, twenty-two were killed in the shipwreck, not counting the two alleged murder victims. The eight survivors are highly aware that they hold the power to shape the story of what happened in the days leading up to the deaths of Thacker and Klein. It is notable that only three of the eight actually report their suspicions of murder to police; the other five seem willing to let the matter go. Valcour must question traumatized survivors, who, even if they are not being intentionally manipulative, were exhausted, starving, and possibly drugged at the time of the murders. And, of course, one of them may be a killer, hiding behind the mask of a victim. 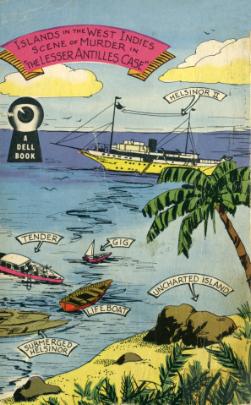 Just when the inquiry seems permanently stalled, Miss Whitestone has an idea: she will buy a new yacht, the Helsinor II, and recreate the fatal voyage. Even with armed police officers serving as crew, it isn’t long before Miss Whitestone begins wondering whether she’s made a dreadful mistake.

There’s a good puzzle here, but the book’s most appealing quality is its subtly acid-tinged portrait of old money New Yorkers, their lives untouched by the shadow of the Depression. While Miss Whitestone is portrayed rather sympathetically, serving as the viewpoint character among the suspects, there are little touches of ambiguity in her character. She is a perfect lady of the old school, but not all of her old-fashioned qualities are positive. Miss Whitestone frankly admits that if her niece Erika does not get married, she will consider the effort of raising her a complete failure. She never lounges while wearing a hat, thinks sunken bathtubs are not quite nice, and it never crosses her mind to buy a car that would provide protection from the elements to the chauffeur as well as the passengers.

As entertaining as the New York scenes are, it is the interactions on the yacht that further deepen the characters and their relationships. Miss Whitestone grows alarmed by the prospect of a love triangle between Erika and her cousins Roy and Phillip. The murder investigation causes her to examine her nephews with a more critical eye, and she’s no longer so sure that either of them would be a suitable husband for Erika. Lillian Ash reveals herself to be smarter, but also more vulnerable, than her theatrical mannerisms would suggest. Even side characters are sharply drawn, especially the diver who is hired to explore the wreck of the original Helsinor and woos Miss Ash in his own unorthodox fashion.

Mr. Stumpf had had no previous experience on yachts, but he was a widely-read man and knew, from more novels than he could tell of, that young women of wealth—and all young women aboard yachts fell into that class—were only too apt to tire of it all and to yearn for the solider and meatier contact of he-men, in contrast to the Reginalds and members of the foreign aristocracy with whom life’s whim threw them into daily shoulder-rubbing contact […]

He told her about the bends and the diver’s palsy. He moved about with a complete frankness of detail among the intimacies of his interior anatomy, and she had a confused impression, after he had concluded, that Mr. Stumpf was little better than a walking corpse.

Miss Whitestone and her nephew Roy share a telling moment while gazing upon the island where she was shipwrecked. Roy is awestruck by the beauty of the island. Miss Whitestone can only remember the discomfort, the fear, and the boa constrictors. These are wealthy people. Their lives are beautiful. But right now, they can see only death.

The Lesser Antilles Case is a superb shipboard mystery, highlighted by its nuanced characters and prose. Though the solution contains a few improbabilities, this is compensated for by the cleverness of the clues, including a deceptively simple murder method. Above all, this sharp and witty detective story is a wonderful escapism, a pleasure from beginning to end.

This part of the book recovers some of the high tension of the earlier pair of maritime mysteries, particularly during the nail-biting diving expedition.  However, the first half of the book is compelling as well, a fast-paced, smoothly-written investigation in New York City locales both high and low of events in the near past.

It has to be said that there is one key plot point that may stretch credibility a little. King’s attempt to make it plausible is certainly ingenious and interesting and he just about gets away with it. That’s really the only major reservation I had about this book. Other than that it’s a well-executed example of the golden age detective tale. There are clues in abundance but King knows how to keep the reader guessing.

The Lesser Antilles Case (also published as Murder Challenges Valcour) is available as an ebook from Wildside Press. 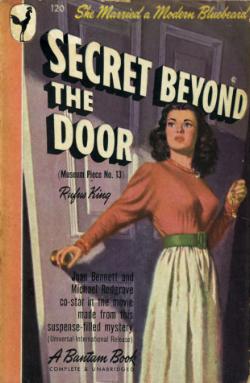 “Why is the door locked? Isn’t it complete?”

“Yes,” Earl said, “it is complete, but it will never be on view. It is a luxury with which I intend to indulge no one but my selfish self. It is a secret which shall remain completely mine…Even you shall never see it, Lily.”

All of Lily Constable’s friends are surprised by her whirlwind marriage to newspaper owner Earl Rumney. After all, she’s wealthy in her own right, and still mourning her beloved husband. Even the sweet-natured Lily is starting to wonder if she’s made a mistake. No one seems to want Lily at the isolated Rumney mansion, least of all her new husband. When he isn’t at the paper, Earl is working on his hobby: recreating rooms where famous crimes took place. He’s completed twelve rooms already. Should Lily be afraid of number thirteen? END_OF_DOCUMENT_TOKEN_TO_BE_REPLACED 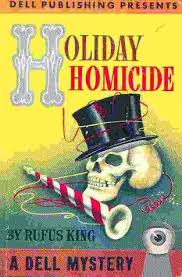 “In any community, no matter how confined by natural barriers, or how small, there is always murder. I’m unfamiliar with the census number of the population that surrounded Cain and Abel but I imagine it must have been quite negligible.”

On New Year’s Day, most New Yorkers are sleeping off the revels of the night before. Myron Jettwick’s sleep is more permanent. The millionaire lies dead on his yacht, and his nephew Bruce knows that only the eccentric detective (and nut fancier) Cotton Moon can solve the crime. Luckily, Moon’s yacht happens to be docked right next door. With the aid of his secretary/bartender Bert Stanley, Moon’s investigation takes him from the East River to the Caribbean in search of a slippery killer—and the even more elusive sapucaia nut. END_OF_DOCUMENT_TOKEN_TO_BE_REPLACED