“You dreadful creature. You killed her, but I suppose you know that.”

A bride-to-be is happily preparing for her wedding, until she receives an anonymous letter. “I’ve been waiting for this,” it reads. “If you don’t call off the wedding, I will.” But this bride is tougher than the letter-writer imagines. She has only one night to discover the identity of her enemy, save her marriage…and possibly her life.

END_OF_DOCUMENT_TOKEN_TO_BE_REPLACED 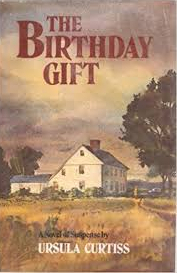 “He had thought, before, in terms of a thread-end which he could not relinquish. He thought now in terms of fine and nearly invisible wire leading to what, under its look of quiescence, might just possibly be a freshly armed bomb. “

No good deed goes unpunished, as an innocent favor results in deadly consequences for Lydia Peel.  Since she is already traveling to Connecticut to attend a family wedding, it should be no trouble to deliver a birthday gift to her friend’s sister right down the road. Paula and Emmett Blake don’t seem grateful for the present, however. In fact, they can’t wait to get rid of Lydia.

More welcoming is their other guest, Mrs. Chilton. The old lady laughs over a dropped cigarette; she is such a careless smoker by day, she confides, that she doesn’t dare smoke at night. Just a few hours later, though, Mrs. Chilton burns to death in her own bed. Lydia suspects murder, and all at once a simple errand becomes more complicated, and more dangerous, than she could have imagined.  END_OF_DOCUMENT_TOKEN_TO_BE_REPLACED

All the neighbors are dying to know what makes Mrs. Marrable’s poplars grow so well in the desert. That’s just one of Claire Marrable’s secrets. After the death of her husband, she decides she would rather be a wealthy widow than a poor one. The only thing holding her back is money, but that’s easily remedied. Rich old ladies are expected to hire companions, and hired companions are often alone in the world with their savings. Mrs. Marrable’s had five companions now, and there are five poplar trees lined up in her garden, all in a row.

But the sixth companion is different. Has Mrs. Marrable finally met her match? END_OF_DOCUMENT_TOKEN_TO_BE_REPLACED

“It isn’t over with,” Lou said flatly. “People remember kidnappings and everybody connected with them long after they forget other things. I’ve found that out.”

Summer is in full swing at the Coastline Club, and Lou Fabian couldn’t be happier with her job there. No one at the club could possibly associate the new employee with Louise Royce, who was mixed up in that scandalous kidnapping case last year. Until one day the phone rings. “I know who you are, Miss Fabian.“

Is it just a prank call, or something darker? Lou gets her answer when a woman is killed in the woods behind her cabin. Although she is drawn to one of the male guests, she’s not sure if he can be trusted. Lou must overcome her past trauma if she hopes to save herself and find the killer who is hiding in plain sight. END_OF_DOCUMENT_TOKEN_TO_BE_REPLACED

[He] looked bitter and dispossessed, like a man who had had something precious snatched away from him. It wasn’t grief; it had nothing to do with grief. Was that why any compassion she felt for him was purely in the abstract? Because he had said “my wife” in the same tone he might have used to refer to his horse, or his car?

The murder down the street barely registers for Mary Vaughan. After all, the killer was arrested right away, and she has a lot going on in her own life. Not only has she recently broken off an engagement and quit her job, but Mary is also responsible for her teenage cousin Jenny, whose parents sent her to Santa Fe to escape a violent older boyfriend. When Mary learns that Jenny’s ex is in the area, they need to get out of town in a hurry. A long weekend in Juarez should do the trick.

What Mary doesn’t know is that the murder victim’s husband David is very aware of her. This possessive man has been nearly undone by his lack of control surrounding his wife’s death. The police are keeping him at arm’s length, and the swift arrest of the culprit robs him of a proper outlet for his rage. The police don’t know that David’s wife spoke to him before she died. She told him that she sought help from a blonde neighbor, who closed her door against the dying woman.

David believes he has found his wife’s true murderer: Mary Vaughan. And he is following her to Mexico to kill her.

END_OF_DOCUMENT_TOKEN_TO_BE_REPLACED

What are we going to do about Elizabeth?

Elizabeth March has nothing to be afraid of.

Happily married, with a beautiful country home, she balances a successful writing career with raising two children. She’s even recovering well from a recent stillbirth. And why not, when there are so many people who want to help her? Cousin Constance, after years nursing her own invalid mother, has moved in to lend a hand. The new nanny Noreen is so good with the children—even if nobody knows much about her. Best friend Lucy and her husband Steven support Elizabeth despite the difficulties in their own marriage. And Elizabeth’s husband Oliver always makes sure she takes her sleeping pills. Always.

So there’s no reason for her to feel so unsettled. Until the evening she does not take her sleeping pills and overhears Oliver asking Lucy, “What are we going to do about Elizabeth?”