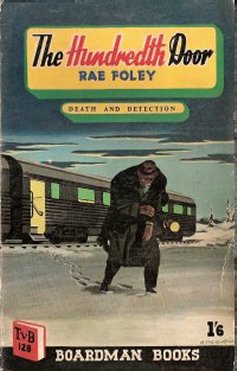 “Are you aware that people usually feel that asking me anywhere is tantamount to an invitation to murder? At least, they seem to want me when murder is in the air.”

Meredith McGrath doesn’t remember her mother. That’s because she and her lover were executed for murder when Meredith was only three years old. The victim was Meredith’s father. Eighteen years later, she is excited to finally experience her first Christmas with her father’s family, but it’s been a long, dangerous journey to the family lodge in the Adirondacks.

A strange man on the train seems to know exactly who Meredith is, and where she’s headed. “Neither of us, Miss McGrath, has friends where we are going.” Hours later, he is murdered just outside her berth, but the body vanishes, leaving only a bloodstain behind. Meredith soon learns that the stranger is right about the McGrath household—she finds few friends there, and at least one very determined enemy. Christmas day is Meredith’s twenty-first birthday. It may also be the last day of her life.

The Hundredth Door is an enjoyable mishmash that probably shouldn’t work as well as it does. Though almost every detail of the story is ridiculous, this isn’t a stupid book. It’s a surprisingly intelligent detective story with a vein of cynicism running throughout. Meredith’s romantic ditherings are tiresome, but they are not the main focus of the plot, which centers around an eccentric and ruthless amateur detective.

Oh, excuse me, the skeletal John Harland is actually a “humanistic scholar” who is interested in crime only in the sense that he is interested in all human endeavor. That’s a new one—I’m not a detective, I’m a humanist. Whatever he is, Harland’s investigation is delightfully coldblooded; at one point, he orders a murder victim’s best friend to diagram the position of the corpse. Harland is determined to push all the suspects as far as possible to determine the truth.

A murderer is always mad in a certain sense. And he always thinks he’ll get away with it. He is insanely optimistic and he is—fortunately—careless. Dickens once wrote that murderers shut ninety-nine doors most carefully, only to leave the hundredth door wide open. I’m looking for that hundredth door.

Harland is on the scene thanks to Lydia Manton, the only one who believes in the innocence of Meredith’s mother Louise. (Lydia is also quite overweight, which we’ll be reminded of about five hundred times over the course of the book.) In fact, she’s loyal to a fault, complaining that Louise’s husband Oliver was unreasonably jealous, while in the same breath praising Louise’s true love for another man. That man, Tom Harper, went to the electric chair along with Louise McGrath after they were convicted of crushing her husband to death with a steel beam at a construction site. Lydia points out that all of Oliver McGrath’s siblings were present during the original crime. For that matter, so was Lydia, and Tom’s childlike wife Alice.

Now they’re all snowbound together. Christmas is the excuse for their gathering, but the real reason is Meredith’s birthday. If she dies before turning twenty-one, her fortune will revert back to the McGrath family. Someone in that family killed once, eighteen years ago, and won’t hesitate to do so again.

After meeting Meredith, I’m kind of on the killer’s side. Secretly engaged to her cousin Ricky, she is nervous to meet his glamorous sister Edith and their parents George and Violet. Meeting the in-laws is nerve-wracking enough when they aren’t related to you. As soon as she arrives, however, Meredith realizes that she should have checked out all her cousin options before settling for the “unprepossessing” Ricky. She falls instantly in love with Kim, an impoverished flower farmer who is there to either borrow money or marry his cousin Edith, whichever he manages to accomplish first. Just to add to the family togetherness, Meredith’s womanizing uncle Paul is very interested in his new niece.

As in No Tears for the Dead, Rae Foley demonstrates a relaxed attitude to fidelity that makes it hard to root for the main couple. Meredith is engaged to Ricky, and Kim is seriously involved with Edith, yet these two are always canoodling in the woodshed and saying things like, “I never thought love could be so natural!” Neither of them feel any need to share this turn of events with their current romantic partners, who are also their cousins. This is only one reason why dating within the family is usually frowned upon.

At least Meredith has the sense to put off marrying any of her relatives until she figures out which of them is trying to kill her. “One of you pushed me. And I don’t know which one it was,” is certainly a chilling response to a marriage proposal. The outcome of this romantic quadrangle is surprisingly realistic and mature…except it’s impossible to forget that all of these people are blood relations. A love story in which the heroine cannot decide whether to marry her first cousin or her second cousin is always going to be a hard sell.

If you can get past all the cousin romances, The Hundredth Door is a bleak winter mystery with moments of real emotional power. Unfortunately, the murder mystery is not as strong as it should be. The crime is not so much solved, as the killer seems to just lose patience and panic. Harland does warn, though, that he is not primarily interested in the murder. He’s determined to solve the countless little personal mysteries that have contributed to the events of this Christmas, some of them building up over decades. His methods are painful to the family. However, he also clears away the old lies and misunderstandings that have been holding everyone back in their lives. As difficult as this process is, Christmas ends with the promise of better things to come.

The Hundredth Door is out of print, with a few used copies kicking around. It was reprinted by the Detective Book Club along with Never Say Die by Ione Sandberg Shriber and The Bachelors of Broken Hill by Arthur W. Upfield.