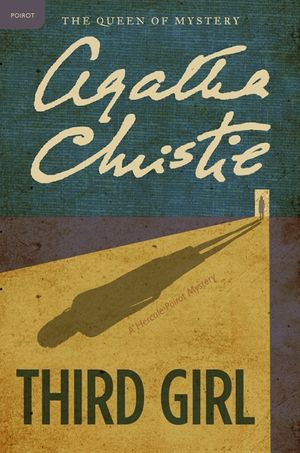 Nothing gets between Hercule Poirot and his breakfast, but he is willing to make an exception for a damsel in distress—especially one who claims to have committed a murder. His would-be client is horrified by the sight of the great detective, however. She runs off, declaring, “You’re too old. Nobody told me you were so old.”

Poirot can’t stop thinking about the encounter, and not just because of the affront to his vanity. He’s worried. This young woman needs help. And she’s going to get it…even if Poirot has no idea who she is.

Third Girl is billed as Agatha Christie’s foray into the swinging sixties. And it is certainly a portrayal of the 1960s, as seen by an older generation who cannot understand why these young people won’t take a bath and get the hair out of their eyes. Taken purely as a mystery novel, however, Third Girl is enormously satisfying, a twisty puzzler that, for all its surface modernity, proves that nothing is more timeless than murder.

Poirot gets a break early on, thanks to his old friend, the mystery writer Ariadne Oliver. She remembers discussing Poirot with a dreary girl she met at a party named Norma Restarick. That should have been the hard part; surely it will now be easy to locate Norma and figure out what murder she may be involved with. This proves to be much more difficult, however. The more involved the case becomes, the more Poirot worries about his client.

“She is not competent,” said Poirot. “That is how I see her. She is not one who can cope with difficulties. She is not one of those who can see beforehand the dangers that must come. She is one of whom others will look round and say ‘we want a victim. That one will do.'”

There are certainly some suspicious circumstances in Norma’s life. Her father Andrew Restarick has recently returned after years away in South Africa with a young second wife in tow. The reunion of father and daughter is not helped by the presence of Mary, who develops a tense relationship with her stepdaughter.

Like many young women of the 1960s, Norma prefers life on her own in London. She is “third girl” in a flat shared with the highly efficient Claudia Reece-Holland and party girl Frances Cary. The idea of the third girl at first seems like nothing more than an up-to-date hook on which to hang the story, but it turns out to be an apt description of Norma’s life. She’s never a real part of the central group, the pair who wanted to be together in the first place. She’s the afterthought, the latecomer who gives the least (because that is all that’s wanted from her) and gets the least in return. Norma could never be a first or second girl because she simply doesn’t have any friends, aside from David Baker, an artist with a flamboyant personal style. “Velvets and satins and long curly hair,” is how Mrs. Oliver describes him. “He struts. That’s why I nicknamed him a peacock. Shows off, you know. Vain, I should think. Proud of his looks. Perhaps a lot of other things as well.” 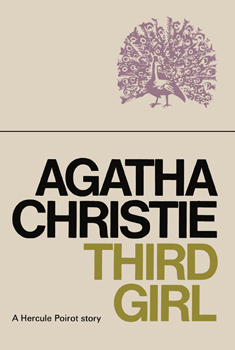 “The Peacock” is the most striking character in the novel. David Baker’s easygoing charm can turn rough at a moment’s notice, yet Poirot finds it difficult to determine exactly what the younger man is up to. Is he sincere in his feelings for Norma, a simple gold-digger, or something far more dangerous? His bright feathers dazzle the eye, making it impossible to tell.

Christie knows that Carnaby Street is not her natural habitat and mostly steers clear of anything too embarrassing. (Mostly: “I’d say she’s been taking purple hearts, and dream-bombs, and probably LSD. She’s been all hopped-up for some time.”) Norma is right, however, that Poirot and Mrs. Oliver are too old to appreciate this particular scene. Neither of them care for the sloppy, androgynous styles of the “beatniks” and “mods.” Still, Poirot is quick to point out that the long hair and elaborate fashions sported by David Baker are hardly new, citing Van Dyke and Beau Brummel. “In a gold frame, wearing a lace collar, you would not then say he was effeminate or exotic.”

Though Poirot is quite active early on, he eventually passes most of the detection to his investigator Mr. Goby and to Mrs. Oliver. She is thrilled to don disguises and trail suspects, scattering hairpieces wherever she goes. She must also deal with real dangers, however, including a genuinely menacing encounter in the streets of Chelsea. I also enjoyed an odd, but totally in-character, recurring bit in which Mrs. Oliver struggles to accept her new wallpaper. She has recently changed out her old jungle-themed decor in favor of cherries—a mistake, she now feels.

I wish I had those tropical birds and things back on the wall instead of these idiotic cherries. I used to feel like something in a tropical wood. A lion or a tiger or a leopard or a cheetah! What could I possibly feel like in a cherry orchard except a bird-scarer?

Sadly, this plot thread remains unresolved, so the outcome can only be imagined. Many of Mrs. Oliver’s musings on the vagaries of the era’s pop culture, fashion, and home decor seem like nothing more than comic digressions, but Christie stashes clues everywhere. Third Girl is no exception. While it’s tempting to concentrate on Christie’s awkward handling of youth culture, the way she weaves other aspects of 1960s society into the mystery is extremely clever.

Third Girl is a strong late book for Christie, a page-turner built around a truly diabolical crime. Poirot has no idea what’s going on early in the book, forcing his investigation to cast a wide net. This may test some readers’ patience, but I loved every minute of it. My favorite part of any mystery is the early bit where it isn’t yet clear what is going on and it seems that anything could happen. Third Girl stretches this about as far as it can possibly go (which admittedly will not be to everyone’s taste). Only later does it become apparent how relevant some of these seemingly aimless scenes are to solving the crime. And once again, Christie’s cluing is second to none, as she brings together a staggering array of evidence, much of it dropped in the most nonchalant manner, to form a solution that seems both surprising and inevitable.

Unfortunately, Third Girl is one of the novels that demonstrates the waning of Christie’s own grey cells. It isn’t unusual for her to re-use old tricks, but the ones she pulls out of her hat here are reconstituted in shabby fashion. Worst of all, the novel meanders endlessly, stretching a minor tale to nearly interminable length.

A Crime Is Afoot

I must admit that the story is quite loose and, at the end, I was rather disappointed, despite some much more favourable views of some reviewers whose opinions I have in high regard. I feel really sorry it didn’t work for me.

I think one can appreciate why critics were positive: it’s nice to have Poirot back in a truly active capacity, even if he does rely extensively on subordinate investigations by a Mr. Goby, who appears on occasion in Poirot novels.  The brilliant Belgian sleuth is in his environment, with manservant George, the ever-efficient Miss Lemon, endearingly scatty Mrs. Oliver, his magnificent vanity and moral force, his tisane, his sirop de cassis, his chocolate, etc.–it’s a warm bath of authentic Christie nostalgia, something I most definitely missed in Sophie Hannah’s ballyhooed Poirot continuation novel, The Monogram Murders.

But dig below the surface, and you get a surprisingly effective mystery, with a killer who completely wrong-footed me. It’s got a bit of a bad rep amongst Christie readers but I was very pleasantly surprised by this one.

Third Girl is available in paperback, ebook, and audiobook formats from HarperCollins.